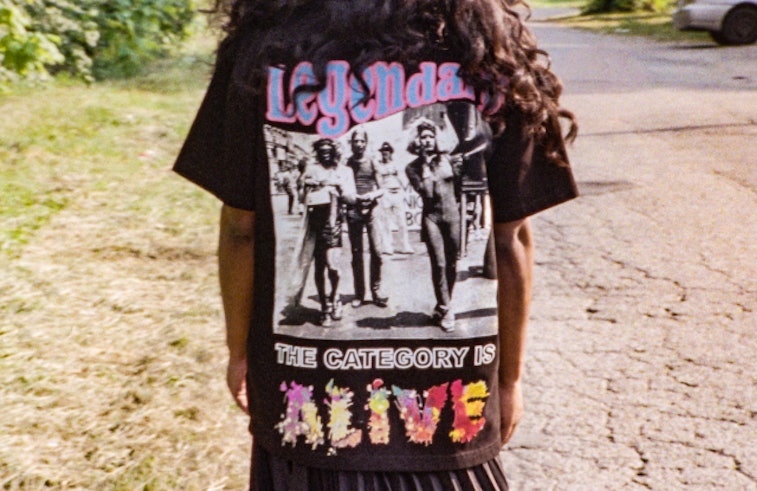 This year has been a tragic one for many people, but especially for the transgender and non-gender-conforming community, which has violently lost 350 lives globally this year — the majority of which were Black and Latinx transgender women. In honor of Transgender Day of Remembrance, Pyer Moss and the Marsha P. Johnson Institute have teamed up to create a limited-edition T-shirt. The partnership is the third installment of “Exist to Resist,” a platform launched in September by Pyer Moss to spotlight the work of social justice organizations.

Prior to this partnership, Exist to Resist supported the Innocence Project through a sneaker release, and more recently made a “Vote or Die… For Real” graphic tee, which aimed to raise awareness about Rock the Vote, an organization working to empower young people politically. Exist to Resist’s newest collaborator, the Marsha P. Johnson Institute, is a nonprofit human rights organization supporting and uplifting the voices of Black transgender people and defending their human rights. Pyer Moss founder Kerby Jean-Raymond said in a statement that the nonprofit stood out to the brand for defending “basic human rights,” and that Pyer Moss seeks to “support them and amplify their voices rather than speak for them.”

Graphics for good — The genderless T-shirt features an image of Marsha P. Johnson, the activist, drag queen, and prominent figure in the Stonewall uprising in 1969. The phrases “legendary” and “the category is alive” are written across the back of the shirt.

“As we reflect on the lives of Black trans people during International Transgender Day of Remembrance, the word ‘alive,’ printed on the back of the limited-edition T should serve as a reminder to everyone to love, humanize and celebrate people while they are still here,” said Elle Hearns, founder and executive director of The Marsha P. Johnson Institute.

The front of the shirt bears a Pyer Moss logo while a Marsha P. Johnson Institute badge embellishes the left sleeve of the black tee. Marsha P. Johnson, with the “P” standing for “pay it no mind,” was a founding member of the Gay Liberation Front and cofounded activist group S.T.A.R., or Street Transvestite Action Revolutionaries, with Sylvia Rivera.

Support in style — The shirt has been designed for anyone to wear, and its classic black color makes the graphics come, well, alive. The T-shirt retails for $100 exclusively on the Pyer Moss website. Dropping November 21, the collaboration falls just after Transgender Day of Remembrance, which honors the memory of the transgender people whose lives were lost in acts of anti-transgender violence that year. All proceeds from the shirt will be donated to the Marsha P. Johnson Institute in hopes that one day, we can celebrate more life. That sells it for me.