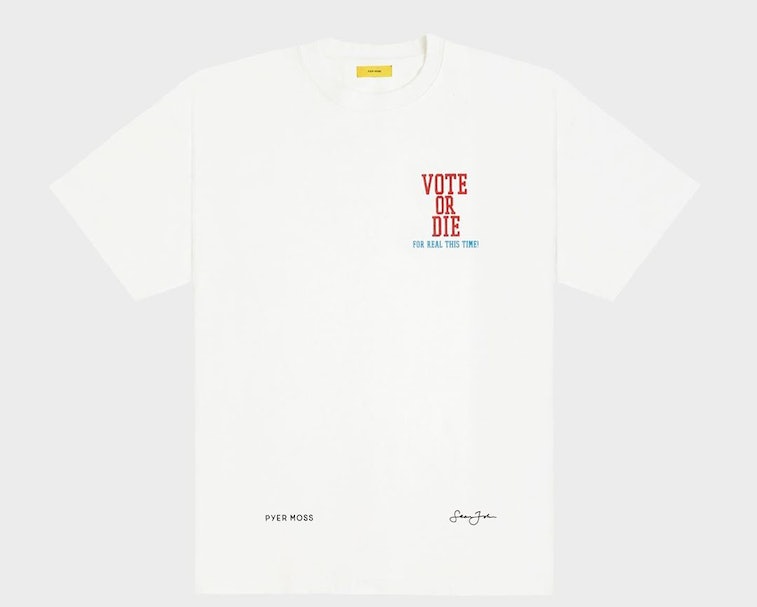 P. Diddy's "Vote or Die" T-shirt endures as one of the most noteworthy (and noble) fashion moments of the 2000s, and it's set to make a return courtesy of Pyer Moss. The brand has partnered with Sean John to reissue the iconic tee, now with the addendum "For Real This Time!" as a reminder of the high stakes of this presidential election. To coincide with the initiative, visitors will also be able to register to vote directly through Pyer Moss' website.

The limited-edition T-shirt will release through Pyer Moss at 12 p.m. E.T., with all proceeds going to Rock the Vote. It comes as part of Pyer Moss' new "Exist to Resist" program, which will highlight the work of social justice organizations and raise money to support them through limited-edition product.

2004 was a simpler time — The original "Vote or Die" T-shirt was released by Sean John and was part of P Diddy's Citizen Change, a political service group founded in 2004 to encourage young people and people of color to vote. During that election season, P. Diddy held rallies in several swing states to not only boost voting but to pressure candidates to address the needs of young and minority voters.

At the time, P Diddy insisted the campaign was non-partisan and told MTV, "I give you my word that this is not about the party, it's about the people." Given the danger of another Trump term alluded to by the new T-shirt, the revived message is anything but neutral.

"Vote or Die" also made an appearance in Pyer Moss' "Sister" Collection 3. This time, it has an added graphic on the back reading "The Promise of America" in reference to the country's failure to uphold the rights of all of its citizens.

Look out for the T-shirt's release at noon today — but most importantly, don't forget to register to vote.