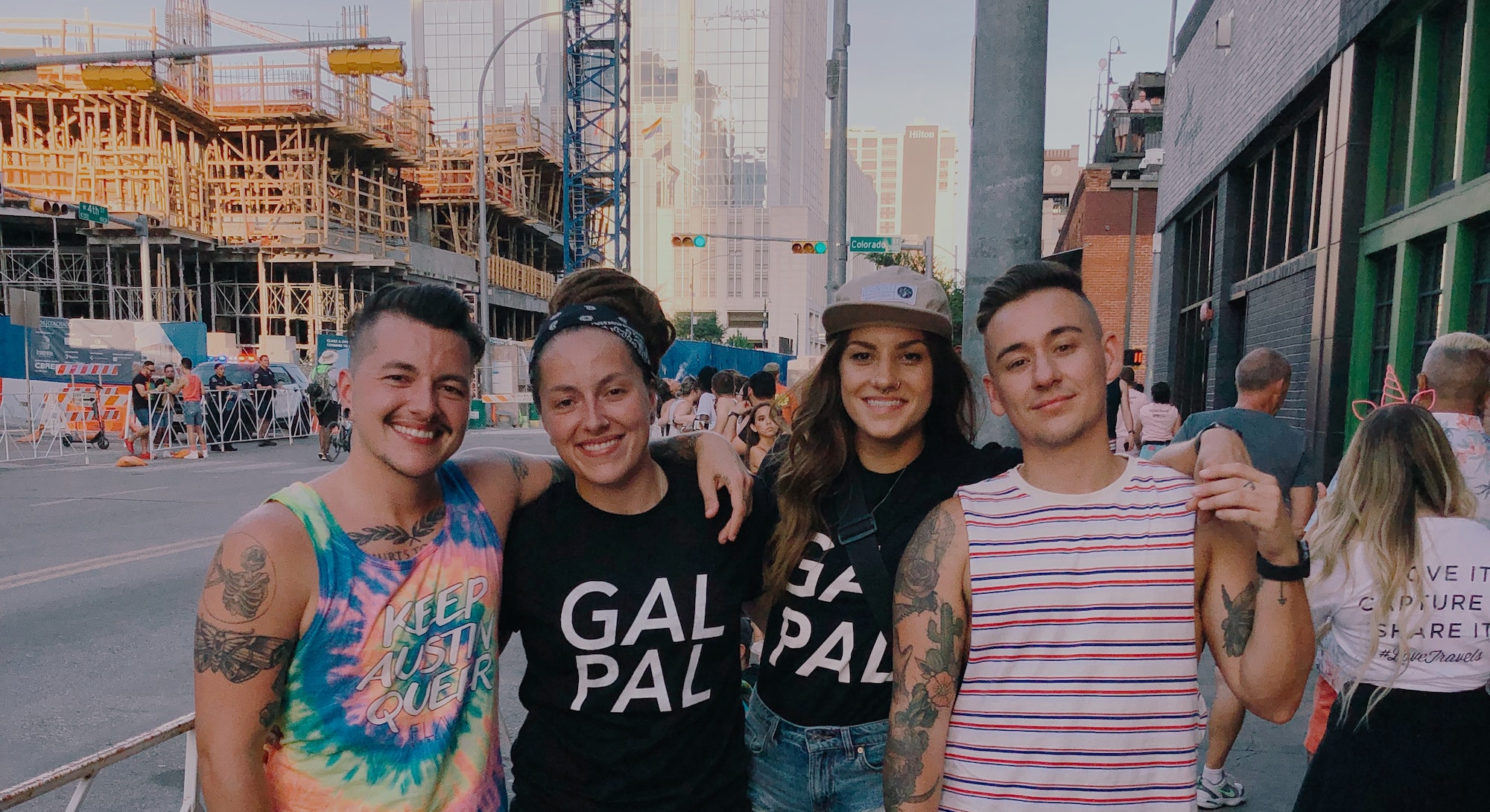 Chris Rhodes attended Austin Pride in 2013 and wore a t-shirt he made emblazoned with the phrase “Pretty Boy.” About 50 people came up to him and asked where he got his shirt.

In 2014, Rhodes and his twin sister Courtney decided to sell the “Pretty Boy” t-shirt, along with other designs including tie-dye sweats and tees with phrases like “Gender Roles Are Dead,” and “Wish You Were Queer,” under the name FLAVNT Streetwear. Each design is carefully crafted with a sporty nod — the twins each studied graphic design in college, and their distinctive eye shows through.

FLAVNT is celebrating Pride this year by donating 15 percent of proceeds from sales to the LGBTQ Freedom Fund, which posts bail for LGBTQ people and the Marsha P. Johnson Institute, a nonprofit that works to end violence against black transgender women.

And FLAVNT is just one of several apparel brands that look to Pride Month in June, when the LGBTQAI+ community honors the Stonewall uprising (a series of riots that the community led in Manhattan in 1969) to celebrate diversity and raise funds to help different organizations along the way. Pride usually consists of lively parades and marches, but between between COVID-19, Black Lives Matter Protests occurring all over the country, and recent murders of transgender people of color, it looks a little different in 2020.

More than a brand

Streetwear brands like FLAVNT, Transguy Supply and The Phluid Project are redefining Pride in by highlighting marginalized groups, creating interactive experiences and encouraging a ubiquitous ethos with staying power. "I feel very lucky to be part of the LGBTQAI+ community because Pride is always something we fight to show," said Rhodes, who is transgender.

Transguy Supply, a brand offering graphic t-shirts, packers (used to create a bulge in a person’s pants) and binders (used to flatten the chest) for transgender and non-binary people, is celebrating Pride Month with a series of Instagram Live talks from inspiring LGBTQAI+ individuals. Speakers have included trans nurse Aaron Rien and queer writer, publisher and nurse Anita Dolce Vita. Instagram Live became an essential tool during the COVID-19 lockdown, as people across the world tried to stay connected with friends, family, and their favorite artists or brands.

“Pride is always something we fight to show.”

During each Transguy Supply Instagram Live talk, viewers have the chance to win products if they donate to a black organization and send the brand a screenshot. Giveaway items include a rainbow-hued packing strap and colorful, sparkly nail polish from Transguy Supply’s collaboration with nail polish brand, Jin Soon.

With Transguy Supply, Bjorkman also seeks to highlight the history of the trans community. One of the final Instagram Live talks will be with Jamison Green, a transgender activist who has advocated for workplace equality, legal rights and health care, and helped push for health insurance to cover sex reassignment surgery.

Bjorkman, who studied menswear design at NYC’s Fashion Institute of Technology, has also created an ongoing series of t-shirts with illustrations of prominent figures in trans history — including Kylar Broadas, the first trans person to speak to the senate and trans jazz musician Billy Tipton. The next shirt will be an illustration of Jamison Green. "Now more than ever, the people are taking back Pride and we're taking it back to the people who need the most protection,” Bjorkman said. “And we have to give them the loudest microphones."

“There’s so much intersectionality between the queer movement and the Black Lives Matter movement.”

The Phluid Project, a multi-faceted retail company, also emphasized the importance of supporting groups within the community this Pride. That's why it launched line of colorful printed socks with Happy Socks, in which 20 percent of the proceeds will benefit the Trevor Project, a non-profit that provides suicide prevention services to LGBTQ Youth. Throughout June, the Phluid Project has been donating to organizations that benefit queer people of color: the Homeless Black Trans Women Fund, the Marsha P. Johnson Institute, and Pose actress Indya Moore’s COVID-19 relief fund.

"There’s so much intersectionality between the queer movement and the Black Lives Matter movement,” said The Phluid Project’s founder, Rob Smith. “It feels really powerful to see this shift happening.’

The Phluid Project came about after Smith, a former executive for Levi’s and Nike, decided to quit his corporate job and go backpacking around the world. He was in Peru participating in an ayahuasca ceremony — a ritual in which involves a strong herbal tea and a Shaman with the intent of opening up one’s mind and allowing them to connect with their deepest self — when he developed the idea to create a gender-free clothing brand.

Within a few years, The Phluid Project has become an established brand selling graphic tees speaking out against gender norms and job portal that helps LGBTQAI+ individuals find jobs in safe, inclusive spaces. "We just joined in a movement and became a platform for people to share their thoughts and self-expression," Smith explained.

Pride this year is just about that — freedom of expression no matter the color of your skin, the gender you identify as, how you choose to dress or who you love. "Pride to me is celebrating diversity, celebrating LGBTQAI+ folks,” said Bjorkman. "It's about being accepted, being out, being vocal, being political and reclaiming our space in the world."

While we won’t be seeing any parades or marches this month due to COVID-19, people can come together through national and global Pride events happening online.

With the support of Smith and a board of Can’t Cancel Pride committee members, Procter & Gamble and iHeartMedia are hosting a digital Pride event called, “Can’t Cancel Pride: A COVID-19 Relief Benefit for the LGBTQ+ Community,” in which celebrities and artists including Billy Porter, Ricky Martin, Katy Perry and Adam Lambert will come together for a night of celebration and entertainment. The event will take place Thursday, June 25 at 9 p.m. on iHeartMedia stations.

"I looked at all the parades being cancelled and I thought, ‘what if I did something differently?” Smith said. “No one has ever done a national Pride before."

Despite COVID-19, Black Lives Matter protests and the country’s generally somber mood, brands are using their Pride platforms to bring the community together and celebrate all identities while encouraging people to speak out for and give back to those in need. "It's a different tone this year. It's a little more serious," Smith said. “It’s not this hyper-sexualized gay man dancing in short shorts. It's about this representation of our entire community.”

And Smith's sentiment is echoed across all the different brands making apparel and other for the greater good: It's a movement to push the entire LGBTQAI+ community forward. “I think [this] can be a huge moment for people to feel they’re not alone,” Rhodes said.

A global pandemic, it seems, can't and won't break that spirit.