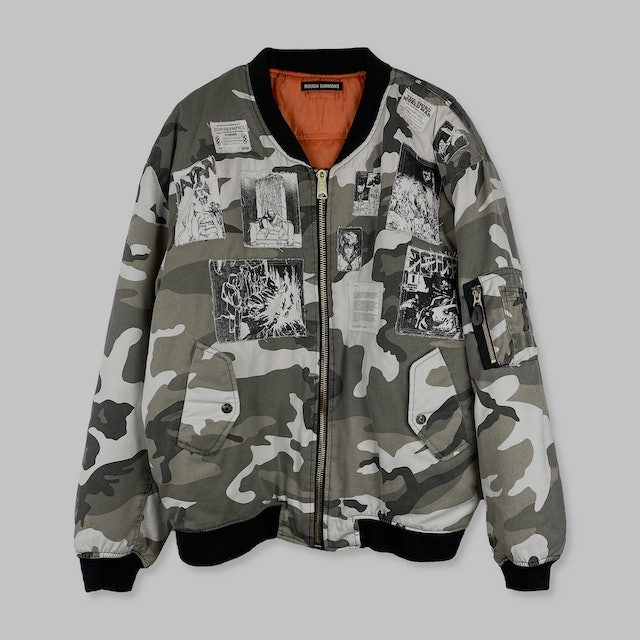 Fashion has progressed past the need for parody brands, but Akira fans may just have a hankering for this spoof of Raf Simons' most coveted piece. Rough Simmons has recreated the FW01 "Riot" bomber jacket, which has sold for up to $47,000 on the secondary market, with hand-screened patches inspired by the anime epic.

Officially, the parody garm is called the "Neo-Tokyo Bomber Jacket" — because copyright protection for films is much more robust than in fashion. So what we have on our hands here is a doubly unauthorized piece baiting Raf and Akira stans alike.

The oversized MA-1 bomber jacket is given a faux-vintage treatment on black and white camouflage with printed denim patches as decoration. Orange polyester lines the jacket, with the same material used to fill the insulation.

Along with the "Pyramid" bomber from the year prior in 2000, the "Riot!" jacket is largely responsible for the popularity of bomber jackets within menswear. And after Kanye West was seen wearing the latter piece, which he merely borrowed from the collector David Casavant, prices for the rare archival jacket skyrocketed on the resale market.

Rihanna and Drake have also been spotted wearing Casavant's "Riot!" bomber, and it helped usher in collecting of other archival pieces from Simons — as well as the label's re-issue capsule from last year.

Neo! Neo! Neo! — Rough Simmons' patches appear to be taken directly from the Akira manga and include Tetsuo Shima, Shōtarō Kaneda, and Dr. Onishi. There's also one for the (postponed) 2020 Tokyo Olympics, which the anime famously predicted back in 1988.

Whichever fan base you come from, you can land the Raf/Akira parody through Rough Simmons' site for $650. Knowing what the real thing costs, it almost looks like a bargain. But because it's handmade in New York City, $650 is actually quite a fair price.