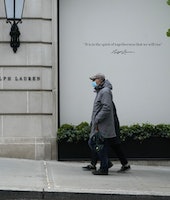 The decline in sales for Ralph Lauren over the past several months.

Quarterly reports are rolling in for the fashion industry and revealing just how bad the pandemic has hit it. Ralph Lauren, like many other brands, has seen its sales plummet — specifically, 57 percent. This comes along with a $1.82 loss per share, which is even worse than the $1.73 analysts were expecting, according to Business of Fashion.

This comes after cost-cutting measures have already been taken, including furloughing employees, rent abatements, and reductions in compensation for executives. The board of directors has also agreed to forgo compensation for the first quarter of fiscal 2021, which just concluded for Ralph Lauren. The company's marketing expenditures also decreased by 34 percent during the same period, compared to the year prior.

It ain't just Ralph — LVMH also reported a decline in operating profit even worse than expected. The luxury conglomerates quarterly report, released last week, showed an operating profit of €1.67 billion (~$1.96 billion), well short of the €2.7 billion figure predicted by analysts and marking a 68 percent decline from the year prior. Overall revenue declined by 27 percent for the first half of 2019, and the company's best-performing segment was wine and spirits, which "only" saw its revenue decline by 23 percent. Fashion and leather goods were the next best segment, reporting a 24 percent decline, even with Louis Vuitton following the industry trend of increasing prices for its bags.

Kering, another luxury conglomerate, also saw its sales decline by 43.7 percent, while the Ferragamo group did even worse with a drop of 60 percent. Elsewhere, Sies Marjan, a small brand backed by the billionaire Nancy Marks, was forced to shutter — as were the retailers Need Supply and Totokaelo. Saying that the landscape is grim means the hills may as well be formed by death's cloak.

What comes next? — Ralph Lauren says it will focus on six key areas as it seeks to ensure its long-term health, including reevaluating its corporate real estate footprint, where its products are sold, and the brand's portfolio. The latter area could mean the death of some Ralph Lauren sublines.

An industry-wide reckoning could come in the form of a more consolidated runway schedule — which numerous experts have called for — and a change in discounting as we know it. Dries Van Noten has led a group of designers calling for end-of-season sales to begin later and the elimination of mid-season sales altogether. The group also wants to see deliveries align closer with real-world seasons, i.e. spring / summer pieces actually arriving during spring and summer.

Even with all these changes, you should get your drink of choice ready to pour one (or a ton) out. The death of brands, sublines, and stores is likely only beginning.