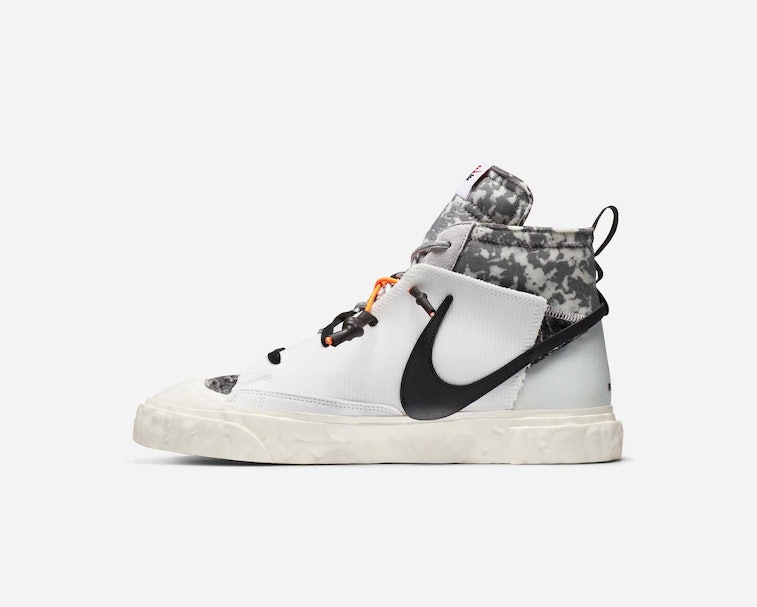 Every Nike collaboration boasts some sort of deconstructed design and brand alteration, but the Swoosh’s most recent debut is nearly unrecognizable from its original silhouette. A new Nike Blazer Mid, reworked by Yuta Hosokawa’s label, ReadyMade, features an altered Swoosh, layered upper, and a splotched foam midsole. Tapping into the Japanese brand’s signature deconstructed, DIY approach, this Blazer Mid may be the most extreme modification to the silhouette yet.

With “normal life” falling apart, Nike has generously given us plenty of deconstructed designs to accessorize our weary feet. Most recently, the brand launched a DIY Air Force 1 sneaker meant to be ripped apart, revealing bold colors and textures hidden beneath an initial layer. Then, through a collaboration with Aleali May, the Swoosh debuted an upcoming Jordan 1 High Zoom CMFT, complete with satin details and an extended collar. Now, ReadyMade’s Blazer Mid transforms the classic silhouette into a wild, Travis-Scott-approved sneaker — but we hope the model hasn’t been overly dissected.

Deconstruction or destruction?— A reflection of the Japanese brand’s core design values and Hosokawa’s sense of nostalgia, the ReadyMade x Nike Blazer Mid features a layered upper, splotched foam base, and angled leather side panels that reimagine the Swoosh’s earliest basketball shoe. Boasting a camo tongue and heel, the sneaker is also decorated with ReadyMade branding and bright hits of orange and yellow. So far, Nike has only revealed white and black iterations of the shoe.

Underfoot, the midsole’s texture adds volume, exhibiting a design made from altered clay molds. Exposed foam surrounds the collar and tongue. As a nod to ReadyMade’s upcycling philosophy, the rubber outsole is made with about 15 percent Nike Grind, a mix of recycled materials originating from Nike manufacturing scrap and worn-out sneakers that otherwise would have entered the waste stream.

The shoe’s standout detail, however, is its warped Swoosh. Half-stiched onto the sneaker’s lateral, the neon orange piece has been made longer and thinner than what we’re used to. As the brand shares, ReadyMade’s iteration is a take on Nike’s 1971 version of the Blazer Mid.

No detail has been left unaltered on this sneaker. Even the Blazer's lacing system has been reconfigured, splitting into two halves with standard black laces and an orange cord with rubber tips. The shoes come in packaging just as deconstructed as they are, featuring a special radioactive green and black box with the ReadyMade’s name in graffiti.

Buy the break down — “We deconstructed the Blazer and recreated it without losing sight of its DNA,” Yuta Hosokawa said of the shoe. “I have been playing basketball since I was in third grade. The first pair of shoes I bought for myself were Nikes. That’s how I came to like fashion.” Despite a slew of ReadyMade partnerships in footwear, apparel, and even furniture, this collaboration marks Hosokawa’s first with the Swoosh.

While we’re not sure Hosokawa has succeeded in maintaining the Blazer Mid’s DNA, his collaboration with Nike is still a fascinating one. Set to drop February 27 on SNKRS, NikeLab MA5, and Dover Street Market Ginza in Tokyo, and select ReadyMade retail locations, these sneakers will sell out regardless of their weird alterations. But with an expected price tag of $160, you’ve got to make sure you’re up for these broken-down shoes — especially if you plan on fighting for them on SNKRS.