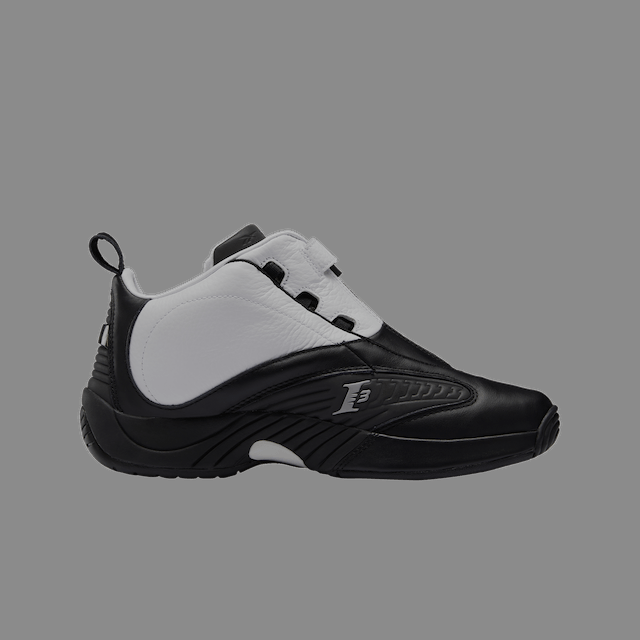 Reebok has gone all in this year on reissuing sneakers from Allen Iverson’s career, and the most iconic one of all is now on its way.

Next month will mark the return of the Answer IV “Stepover,” the sneaker A.I. wore when he famously shook Tyron Lue for a midrange shot and stepped over his opponent during Game 1 of the 2001 NBA Finals. The sneaker’s black-and-white color scheme doesn’t immediately lend itself to obvious fanfare — but the significance of what Iverson did in it places the Answer IV in the realm of Michael Jordan’s “Flu Game” Jordan 12 and the “Infrared” Air Jordan 6 he won for his first NBA title.

Even without the “Stepover,” the Answer IV was on its way to legendary status because of Iverson’s breakout ’00-’01 season. That year, Iverson won his first and only MVP award and led the 76ers to an unlikely Finals appearance against the juggernaut Lakers team with Shaquille O'Neal and Kobe Bryant. But just as crucial as his acolytes were the look and attitude with which he did them, setting himself up as a cultural icon even bigger than the sport.

A true-to-form reissue — Reebok has painstakingly recreated the Answer IV “Stepover” for its 20th anniversary, from the gradient “I3” logo underneath the zippered shroud to the 3M detailing on the quarter panels and tongue. The outsole features the same graphics left behind with each step, including the words “Only the Strong Survive” and both the “I3” and Reebok Vector logos.

Also returning true to form is the DMX technology, short for Dynamax, which created some of the most innovative basketball sneakers for the time. The cushioning system used a series of interlinked air chambers that would fill with air and empty with each stride — tailoring the amount of pressure to exactly how the foot landed.

How to cop — Reebok will rerelease the Answer IV Stepover on June 4 through its own website and select other retailers. While the price of Jordan “Retros” has steadily climbed over the past 20 years, the Answer IV comes in comparatively cheap for today at $130. If hoops are what got you into sneakers, though, this is a pair of kicks that’s truly priceless.