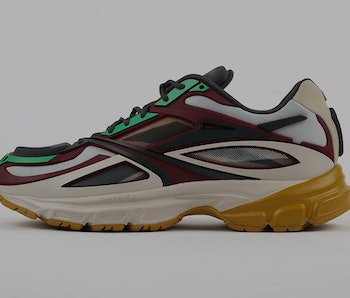 When I first saw the new Reebok Premier Road Modern model, I assumed it was a collaboration with Pyer Moss. The color palette is in line with Kerby Jean-Raymond's prior Reebok sneakers, and the aggressive lines are almost too good to attribute to an in-house release. But I was wrong, this heater is a Reebok general release, one worth picking up while other more high profile sneakers grab all the attention.

The sturdy looking upper is composed of a single molded piece, which may come as a surprise with all the distinct elements involved. A two-tone midsole appears to be just as robust but utilizes Reebok's DMX Ride foam for cushioning that should be more pillowy than it looks.

Of the two sneakers that'll comprise the "Rust" pack, I'm more partial to the burgundy version because of how well it pairs with the clash of neon green. The grey-green variant, however, is also worthy of your adoration — and either would be a solid pickup.

Perhaps the secret is out — The first run of the Premier Road Modern, which marked the revival of Reebok's "Premier Running" collection, didn't get as much attention from the sneaker press but still sold out in under a minute. That's somewhat unusual for Reebok, particularly without a collaborator attached, and means that these next two colors may fly similarly quickly.

Regardless of its sellout time, it's always refreshing to see something so appealing come out of a general release. Many so-called sneakerheads won't raise their head unless a hyped third-party name is involved, but every sneaker worth having doesn't need to arrive with a fracas. These two new color variations, inspired by the chemical breakdown process when metal is oxidized, are well-suited for fall and could easily become your next daily wear.

They should arrive any day now — Reebok has only said that the new Premier Road Moderns will release in early September, which means the clock has already started running. Whenever it does land, you'll be able to pick it up at sneaker boutiques including Sneakernstuff, Bodega, and Packer.