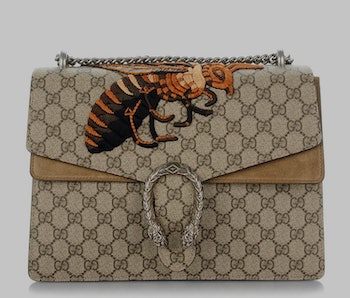 With the pandemic pushing most of our social interactions online, other aspects of life have gone digital, too. Now, instead of spending money on real, tangible items, certain consumers have indulged in buying virtual goods that only exist on the internet — even if those digital items cost more than the physical ones.

The latest cyber style to fuel this ridiculousness, as reported by The Fashion Law, is a bee-embroidered Gucci Dionysus bag that sold for 350,000 Robux — roughly $4,115 — and is only available for use on the online gaming platform Roblox. Tangible versions of the bag, which can be worn anywhere, usually retail for $3,400.

Byte-sized Gucci — Since the Gucci Dionysus bag is only available for use on Roblox, it’s more comparable to an avatar accessory than an NFT, which can be accessed at any time online or resold. To put it more plainly, internet entrepreneur Alexis Ohanian said the purse has “no value, use, [or] transferability outside of the Roblox world.” In fact, the Roblox value of the expensive digital bag has already dropped to less than $800, according to TFL.

Much like an NFT, however, the Roblox Gucci purse was introduced in an exclusive capacity, as part of a virtual two-week event called “Gucci Garden Experience.” Other recent baffling sales — like the near $24,000 sale of a pregnant Hermès Birkin bag NFT — have only proven that customers are willing to pay up for highly limited items, even if they can’t use them in real life.

Gucci’s Queen Bee Dionysus bag is the perfect example of this behavior — not just because it sold for more than its tangible equivalent, but because the Roblox-exclusive bag initially cost 475 Robux, or around $5.50. The price only surged after Roblox users discovered the bag would only be available for a short period of time: one hour on May 17 and one hour on May 18. This is relatively rare for items on Roblox, TFL reported.

A day later, and with that limited availability in mind, “the purses immediately became a hot commodity,” according to gaming site Polygon. “Roblox scalpers [began to] start selling the purse for ridiculous amounts of money, with some people listing the purse for 1 million Robux [or roughly $10,000].” And much like the reselling patterns in the streetwear world, one particular consumer was willing to pay the high price for the exclusive item, all in an expensive bid to own something extremely limited. Other Roblox users did not share this sentiment — perhaps because the eventual price of the Gucci Dionysus bag fell pretty significantly — and the price-surging mania did not repeat itself two days later when another limited Gucci bag went up for sale, reported TFL.

From IRL to URL — With people looking to flex not just in real life, but online too, digital fashion is only seeing an increase. Besides Roblox, Gucci has already partnered with Pokémon Go, and other designer brands like Balenciaga have entered the world of video games by making their own.

While some see the virtual goods as ridiculous, others — particularly people already deep in the cyber world, like Gen Z — are more than happy to partake in digital fashion. Even after we settle back into the physical world post-pandemic, we’re likely to see a continuation of the virtual trend. As TFL put it, brands are “playing the long game” to capture the attention (and cash) of younger audiences.