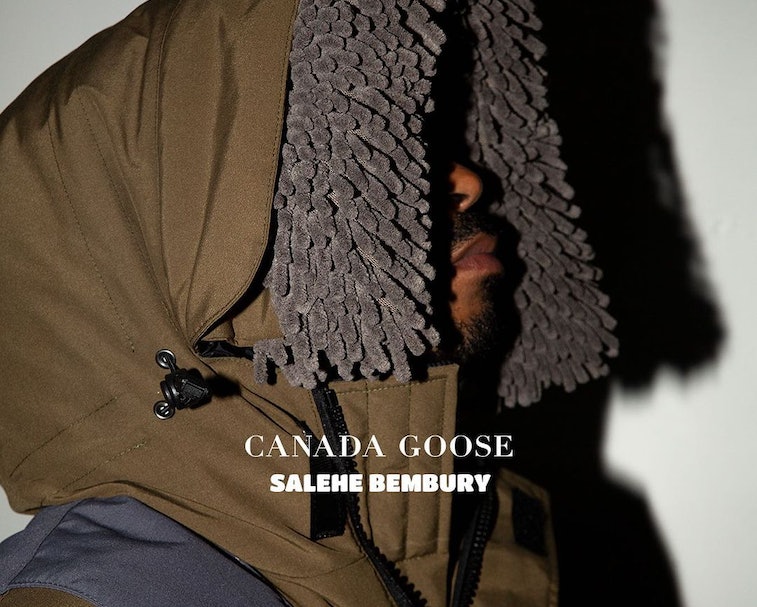 Salehe Bembury leaves his signature fingerprint on everything he touches. Rounding up the designer’s most successful year yet, Bembury took to Instagram this week to tease a Canada Goose collab that leaves people guessing.

Mopping up the competition — The post, which leaves much to the imagination, features a mysterious Bembury in a muted olive winter coat with the hood drawn up. Dark gray panels are stitched into the shoulder and down the chest, while the rest of the jacket is accented with silver and black hardware.

The hood stands out the most, trimmed with lighter gray microfiber-like fabric — replacing Canada Goose’s traditional fur lining — and secured with an adjustable elastic tab. Overall, Bembury and Canada Goose’s earthy-toned jacket looks like it might add well to any winter outwear rotation.

Bembury’s hooded creation, which slightly resembles a household mop or duster, could be attributed to Canada Goose’s initiative to stop using real animal fur in 2022. The designer is known for going the extra mile in his collabs, as seen through his New Balance 574s and 2002Rs, and Pollex Crocs, so the jacket is on par with his creative potential.

If we’ve learned anything by now, it’s that Bembury knows how to make waves and crash servers with his releases. He didn’t include any logistical information besides his and Canada Goose’s names (the latter hasn’t even posted on Instagram yet), but it’s safe to assume the upcoming collab will be hard to come by. If you missed out on the Pollex Crocs, this could be a shot at redemption. Or not.