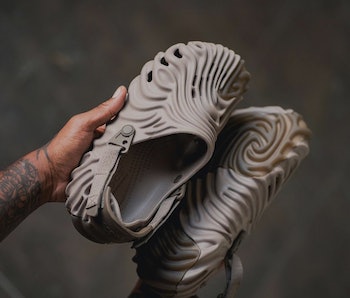 While Crocs are more popular than ever, the coolest foam clogs out haven’t come from the originators. The Yeezy Foam Runner is a more stylish alternative if you can stomach associating yourself with Kanye West, while Alyx recently trotted out its own luxury upgrade. By not straying from the Classic Clog’s original shape for even its most high-profile collaborations, Crocs has allowed itself to be beat at its own game — but that’s finally set to change with an assist from one of the hottest footwear designers around.

After a month plus of steady teasing, Salehe Bembury has finally let go of release details for his stunning Crocs collab. The former Versace footwear lead announced his wavy foam clog will release in December while also revealing a new olive green variant. It’s still a long time to wait, but the road to wearing what was immediately clear as the best pair of Crocs yet is now set.

For updates on the release, you can sign up for the mailing list on the website for Bembury’s new brand Sponge. Bembury previously announced Sponge would be the hub for all his collaborations, and he’ll start out with a bang with his Crocs.

The King of Crocs — Bembury is the first collaborator given the opportunity to create an entirely new silhouette for Crocs, and with it, he’s created a shape that even the most ardent of Croc deniers can’t refuse. An almost topographical pattern makes up the raised upper that seamlessly weaves into spirals on the sole. Two panels of what looks like a semi-translucent rubber climb up from the sole onto the toe and heel, while nylon is used for the straps to channel outdoor gear.

Now that a release month is set, Bembury’s Crocs are set to be one of the most highly anticipated drops before the end of the year. And if this is just the beginning of a new stage for more diverse Crocs collabs, don’t expect the trend to die down anytime soon.