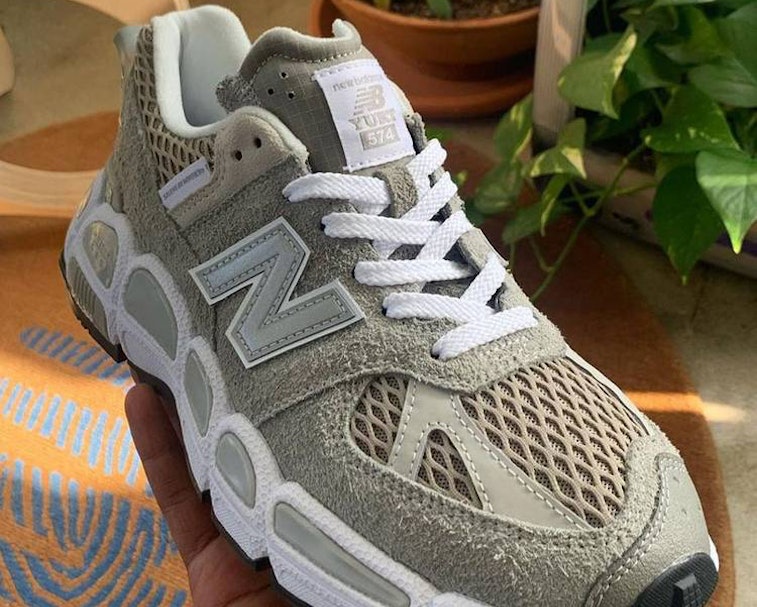 Less than three months after revamping the New Balance 200R, Salehe Bembury took to Instagram to tease his fourth collaboration with the brand, this time upgrading its ubiquitous 574 model. Expanding on his string of outdoorsy themes, the neutral pair appears to be named “Yurt 574.”

While Bembury’s upcoming 574 retains the shaggy suede of his past New Balance collaborations, the silhouette and color palette of this pair veer in an entirely new direction. The upper blends mesh and suede in New Balance’s recognizable grey hues, along with its classic silver “N” emblem and tipstop tongue. Things get funky at the sole, which introduces a completely new style of bubbly pod-like cushioning. Completing the remix is a pointy, whistle-like component protruding from each heel.

Sneaker Royalty — While not quite a household name (yet), Bembury is one of the most influential figures in the sneaker industry. A footwear designer for nearly a decade, his career includes stints at Yeezy and Versace — where Donatella called him “the best sneaker designer in the world.” Since launching his own creative brand, Spunge, last year, Bembury has become a big-ticket collaborator for sneaker brands.

His first standalone collab with New Balance in 2020 birthed the insta-famous, bright orange “Peace Be The Journey” 2002Rs. He transformed the saturated silhouette again in June, with a shaggy suede teal pair dubbed “Water Be The Guide.” Both pairs were inspired by Bembury’s move to LA and subsequent love for camping. This theme seems to be expanding with the “Yurt 574,” paying homage to the neutral tones and circular design of nomadic Mongolian dwellings.

Still Fuzzy — Bembury’s teaser doesn’t include any drop date hints, but the “Yurt 574” will likely be available by the end of 2021. Pricing is murkier: Bembury’s 2002Rs clocked in at $150, and typical New Balance 574s range from $79 to $89. Considering the innovation of this design, its price tag is anyone’s guess for now — but its hype is guaranteed.