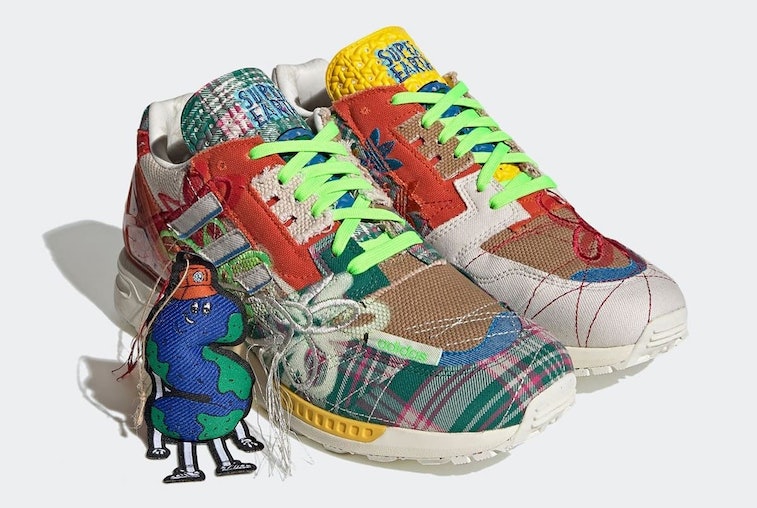 Last year, Sean Wotherspoon confirmed his collaboration with Adidas, but only now are we getting to see the second sneaker from their partnership. In 2020, the designer posted a teaser image of the shoe on Instagram, and now Adidas has finally revealed official images of their reworked ZX 8000 model, which sees the same “Super Earth” branding spotted on Wotherspoon’s upcoming Superstar collab.

Adidas’ ZX sneaker is its latest retro model. Released in 1986, and discontinued in 1989, the ZX line was built to provide runners with lightweight, durable shoes that featured flexible and adaptive soles. Now an all-time favorite from the Adidas archives, the ZX model returned last year as part of Adidas’ landmark A-ZX series, which includes a ZX sneaker inspired by every letter of the alphabet. Although we’re not sure which letter to designate the shoe, Wotherspoon’s collaborative sneaker will be part of the series — perhaps “C” for chaotic.

One man's trash... — Although official images have been released, this shoe seems… unfinished. In true Wotherspoon fashion, multiple patterns take over a mixed-material upper, boasting plaid, brown, red, and off-white canvas. The lateral side of the sneaker features Adidas’ signature Three Stripes, while flower embroidery and bleaching continues to decorate the busy shoe. Strings, loose from the embroidery, hang off the side of the sneaker — wearers might have to trim the excess to avoid stepping on or ripping the fabric.

The shoe’s medial is no less of a mess. There, Adidas’ stripes have been replaced with an array of colorful Adidas logos, which overlap on each other to give a more effortless look. Neon green accents add to this casual narrative, hitting the lateral, laces, and Wotherspoon branding on the heel.

“Super Earth” logos appear on the pattern-covered tongue, suggesting the Sean Wotherspoon x Adidas ZX 8000 is constructed using sustainable resources and practices, much like his Superstar. So far, Adidas has noted the sneaker uses animal-free construction, meaning its makeup is free of leather — of course, that probably won’t change pricing.

Possess the mess — Adidas has yet to announce a release date for the collaborative shoe, but reports are suggesting it will arrive on March 12. And as much as Wotherspoon’s helter-skelter sneaker looks like a DIY project, a pair will set you back $140 — but don’t kid yourself thinking you could design shoes like this at home. Tumultuous times call for equally chaotic sneakers, and this mismatched pair is as anarchic as it gets.