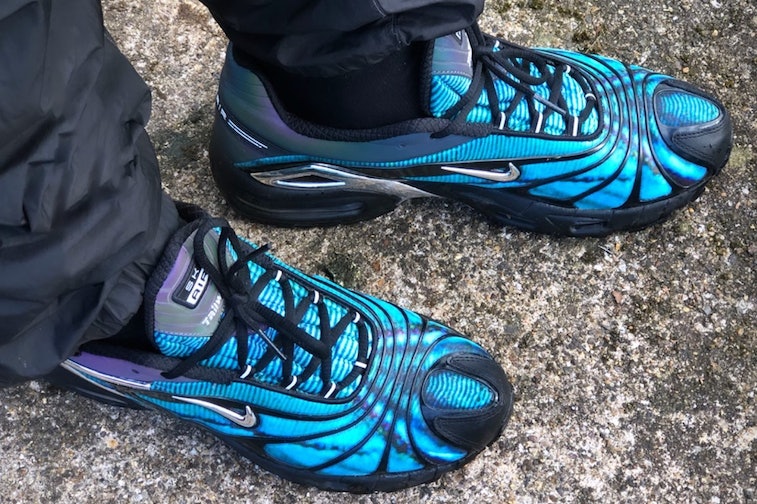 Skepta’s Nike Air Max 97 Ultra 17 was among the best sneakers released in 2017, but his follow-up collaborations haven’t reached the same heights. The British rapper dropped an Air Max 97 BW and Air Max Deluxe in 2018, and then a Shox TL in 2019. Last year marked a hiatus for Skepta’s Nike collabs, but now he’s back with his best shoe since their partnership began.

Skepta used his Instagram story to tease his take on the Air Max Tailwind V, a silhouette Nike brought back last year and has since pushed modestly. Under his direction, the nearly 21-year-old sneaker is made over with chrome and iridescent detailing and a bright blue upper that sits at the intersection of marbling and tie-dye.

In the photos Skepta shared, he’s wearing his Tailwind Vs along with cuffed jogging pants for an ideal Roadman pairing. Last year, rumors indicated the shoe would release in early 2020 — and once it does drop a lot of people will be saying, “This trainer is gully, innit?”

Beef up on the Tailwind V — Nike’s Tailwind series is among its most perplexing, as there’s little in common for the original and its successors. The very first Tailwind released in 1979 and is often overlooked as the first Nike shoe to feature Air cushioning. It looked a lot like the Cortez, and an update to the silhouette wouldn’t come until 1992.

Besides the name, the Air Tailwind 92 may as well have been a completely different shoe. Upon its introduction, its Air technology was not visible and it bore a shape much more in line with sneakers of the era than the shoe that preceded it. With wavy lines and largely neon colors, new Tailwind sneakers would release on a yearly basis until the Tailwind V arrived in 2000.

While not as heralded as the Tailwind IV, the Tailwind V is known for putting a quilted pattern on the upper with a hard “V” cage that sits underneath the collar and splits the shoe into two distinct halves. It would be the last Tailwind released until 2009 when Nike relaunched the series as Tailwind+.

No quilts for Skepta — Skepta’s Tailwind V differentiates itself by putting cage-like paneling atop the upper, without a blocky quilted pattern like the original or the wavier stitching that Nike has used since bringing back the sneaker last year. Like his previous sneakers, it also gets special “Sk Air” branding.

The sneaker was originally slated to release last year, but COVID-19 forced Nike to delay it. And while we still don’t know how much longer until the release, one thing’s clear: Skepta’s Tailwind V was worth the wait.