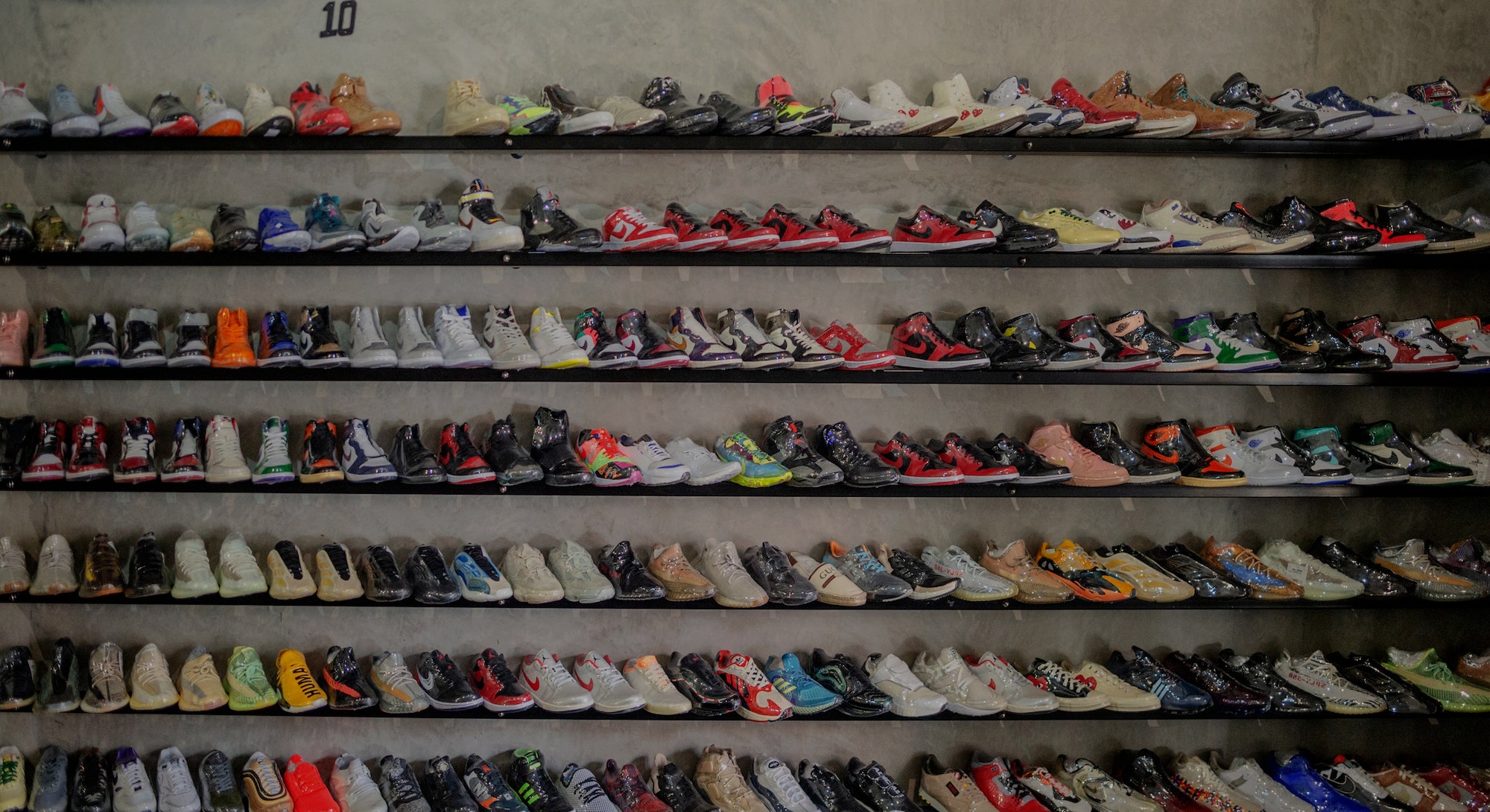 They say capitalism breeds innovation. But in the sneaker world, that innovation has translated into people buying coveted pairs from Nike, Adidas, and other brands, only to sell them at a markup price to reap a profit.

While reselling is a popular practice across different industries, sneaker flipping has detrimentally affected thousands of consumers. It has changed the space forever — it’s no longer just about who loves shoes, but rather who can actually afford them. Websites like StockX cater specifically to resellers and those looking to buy silhouettes at double or triple their original price, while first-hand sneaker stores still haven’t found efficient ways to sell directly to regular customers. After all, as long as the companies are pulling in profit, they don’t seem to care where that money comes from.

But for everyday consumers, resellers have turned the once-enjoyable sneaker chase into a marathon. Going into a sneaker drop knowing that your competitors are only in it for cash — or are actually just bots instead of real shoppers — quickly spoils any hope you had on landing the pair you’re eager to make yours. Seeing resellers then post their massive hauls online only amplifies the rage and disappointment.

As the reselling wave grows, small communities have begun to turn these emotions into something more productive (and effective) than an angry Twitter rant. Sneaker startup SoleSavy announced it would expand its membership with a women’s-only sneaker community, while private Instagram pages like @if_i_cant_wear_snkrs provide women with a safe and inclusive space to connect with each other. If big names like Nike and Adidas can’t guarantee a sanctuary for their consumers, trust that someone else will rise to those standards.

Dejan Pralica, CEO and co-founder of SoleSavy, is one of those people. He told Input that sneaker companies “have forgotten there’s a human on the other side of the screen.” Unlike bots programmed to buy up sneakers, “you can tug at [those people’s] heartstrings; they want to feel like they’re part of something,” said Pralica. Especially with the pandemic restricting social interactions to social media and other online platforms, there’s a longing for community that hasn’t been satisfied.

But “there is no sneaker community without the community of people actually wearing sneakers,” said Pralica. Similarly, there’s no reselling community without the demand for sneakers, even if they cost thousands more than their original price. To Pralica and many others, sneakers are a passion — which is why he sought to create a space where people wouldn’t be judged for the sneakers they liked, or how much they would be willing to pay for them. In the words of Pralica, “if you want it, you get it.”

If big names like Nike and Adidas can’t guarantee a sanctuary for their consumers, trust that someone else will rise to those standards.

SoleSavy is changing the sneaker game by stepping out of it. Unlike Nike, Adidas, or any other big-name shoe brand, its product isn’t sneakers. Instead, it’s sneakerheads, Pralica said. SoleSavy isn’t looking to sell a sneaker and build its consumer base, but rather cater to its consumers first to build their sneaker collections. “There’s something cold about just hitting a ‘buy’ button,” Pralica said, referring to the purchasing method available on StockX and other reselling sites. “[Sneaker culture] is a social culture,” he added — and there’s nothing social about pressing a button to satiate your sneaker need.

Even apps designed to fill the social aspect of the sneaker world, like Nike’s SNKRS or Adidas’ Confirmed app, haven’t really created a space for sneakerheads. These platforms pump out sneaker-related media to be consumed, but don’t offer room for discussion. “There’s no transparency,” said Pralica. “People don’t really know what’s going on or what the landscape is.” So, like any other community, sneakerheads like Pralica have turned to each other for help.

Part of the SoleSavy community is formed through cohorts, Pralica said, which are limited to groups of around 1,300 people for maximum efficiency. Most users are friendly, but those that are aggressive, hateful, or trying to resell any product are “swiftly removed,” said Pralica. “That’s not what we want in our community because it’ll just poison it.”

The whole ideology of the SoleSavy community is to be welcoming and open — most who join are sneaker “novices,” noted Pralica. “Bots aren’t the sole reason [people aren’t scoring sneakers]. It’s an understanding of the dynamics of a release, and educating our customers too.” No drop purchase is guaranteed, but Pralica promises consumers a good time and success if they put time into their sneaker learning.

“Hyped sneakers are designed to break your heart,” he adds, noting their exclusivity. SoleSavy is designed for people who genuinely love sneakers and the culture that comes with. “[Any reseller] has a driving factor of money,” said Pralica. “Our driving factor is community.”

Learning about bots and reseller tactics is different than actually avoiding them in the first place, though. But in a bid to take power away from resellers, LACED hopes to award everyone the same shot of landing a release for a fair price — perhaps one even below retail.

Last year, a pair of Jordans sold on the platform for the mere price of $1.24. And to end 2020 on a high note, LACED auctioned off some of the year’s best sneakers, including the Off-White Air Jordan 5 in Black and Sail colorways, the Travis Scott Jordan 6, and the Jordan 4 Unions. All were sold with the intent of giving everyone a shot at winning a desired pair at a fraction of retail price.

“Hyped sneakers are designed to break your heart.”

Working through an auction, users of the app can work through auctions to bid on in-demand silhouettes penny by penny. Every time a bid is placed, the timer resets to seven seconds, and you get to see in real-time who is bidding in the auction. If your bid is the last one placed when the timer hits zero, you win — but be wary someone else doesn’t reset the timer with their competing bid.

Sean Lozano founded LACED in early 2017 to provide users with the same adrenaline rush that comes with the sneaker “hunt” — but minimizing resellers, he told Input. LACED auctions can reward users with a cheap sneaker in minutes — or hours, depending on demand— and the bidding process cuts out anyone (including bots) looking to flip the silhouette for a quick profit. By implementing the penny auction model, LACED ensures that users are dedicated to winning the shoe, not for its monetary value but their appreciation of the silhouette. “It’s not for everybody,” Lozano said, mentioning the patience that comes with the bidding process. “But what we're trying to do is create an experience, and give people an opportunity to get that shoe that's [worth] $500 or more with a lower budget.”

And like SoleSavy, LACED makes sure to take care of its community. Whether through offering free bids, promo codes, discounts, giveaways, or other goodies to its users, the app “wants to ensure that everybody, when they participate, walks away with something,” said Lozano.

To deter resellers, LACED also gives users the opportunity to flip sneakers they’ve won within the app. “It’s about giving people control while having control,” said Lozano. But to further make sure users are enjoying the sneakers, instead of buying to sell, each LACED profile can only buy the size initially entered. “We’re ensuring that users that want to [bid] on each shoe are still paying for that item rather than the idea of flipping it,” Lozano added.

“We’re trying to give everyone better opportunities… and tools rather than everyone being beat.”

According to Lozano, resellers can never be stopped — but that’s not the point of LACED, or any other sneaker platform. “We’re trying to give everyone better opportunities… and tools rather than everyone being beat,” he said. Even if you don’t walk away with a win on LACED, at least you know the shoe went to another person who actually wanted the silhouette — a person just like you. “We’ve seen these scenarios play out on our Instagram, where one person is able to say they won a sneaker in our auctions,” said Lozano. “Other people who were bidding on it will comment too, but they say, ‘good win, congrats,’ and that’s what we want to instill.”

Smaller communities like LACED and SoleSavy are giving people new opportunities in the sneaker world because, in the words of Pralica, there’s no such world without the actual people behind it. While big companies can continue to roll out the hottest designs for profit, smaller cohorts are looking to what consumers actually want — and if you’re lucky, giving it to them too.

There’s room for exploitation — like Lozano mentioned, there’s no guaranteed way to limit resellers. And with big sneaker producers still limiting shoes to create hype, plus sites like StockX and GOAT encouraging the reselling market, not everyone can grab a pair. But at the end of the day, no platform, big or small, would see success without its community.

Highlighting GOAT’s GREATEST magazine, giveaways, annual events, and designer spotlights, the company’s Chief Brand Officer Sen Sugano told Input: “We wouldn’t be where we are today without our community, which comprises over 30 million members from around the world, all joined together by a mutual passion for sneakers and fashion.” And in recognition of sneakerheads’ commitment to the industry, Sugano added, “engaging and inspiring our community are core tenets of our brand and we will continue to build deeper connections with our members in the years to come.”

What big names like Nike and Adidas need to recognize is that the future of the sneaker industry isn’t just about giving sneakerheads new opportunities to buy hot silhouettes. As demonstrated by SoleSavy, LACED, and even GOAT, communities are blossoming, giving people a chance to connect with others despite their location or sneaker knowledge. Sneakerheads can’t win all the time, but sometimes, helping another enthusiast out can be comparable to a win itself.