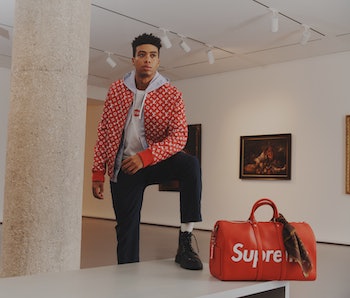 Sotheby’s has spent the past two years facilitating one high-profile auction after another for streetwear and sneakers, and apparently the company has now seen enough to confirm it’s not just a phase.

The esteemed auction house announces today that it’ll enter the streetwear market on a permanent basis, beginning with two collections of rare Supreme. An assortment of more than 200 Supreme skateboard decks will go up for auction as a single lot, while array of items from Supreme’s highly coveted Louis Vuitton collaboration will also be go up for direct sale on an individual basis.

Brahm Wachter, Sotheby’s head of streetwear and modern collectibles, told Input the sneakers category grew three times as much as the company had expected 2021, the success of which informs their decision to wade deeper into streetwear. “We want to build on that,” he says, “And bring items to the market we think our clients might be interested in. In 2022 our sales and sneakers and streetwear will be significantly larger and continue to be focused on specific themes within the calendar year.”

Interested in some ‘preme — Sotheby’s lot of more than 200 skateboard decks is expected to garner between $80,000 and $100,000 and includes collaborations with artists including Damien Hirst, George Condo, and Takashi Murakami. The auction follows a complete collection of every Supreme deck auctioned by Sotheby’s in 2019 for $800,000.

Bidding for the lot of skateboard decks will be open from today through December 15, while a selection of items from Supreme’s landmark Louis Vuitton collaboration in 2017 are now on sale through Sotheby’s Buy Now marketplace. Prices range from $475 to $6,785 and include some of the most prized pieces from the capsule, such as the all-over LV monogram Box Logo hoodie ($1,460) and jacquard denim jeans ($1,050).

Earlier this year, Sotheby’s broke the record for most expensive sneakers ever sold with a Nike Air Yeezy sample debuted by Kanye West at the Grammys selling for $1.8 million in a private sale. Sotheby’s also broke the record for most expensive pair of sneakers ever sold at auction, a record it already previously held, with a pair of Nike Air Ships worn by Michael Jordan during his rookie year garnering $1.5 million.

More like this
Andrea Carrillo
6.21.2022 5:30 PM
Style
The International Anti-Fur Coalition embraces pelts for NFTs only
Maya Ernest
11 hours ago
Rebooting
How old tech like iPods have become hot fashion accessories
Andrea Carrillo
11 hours ago
Style
BAIT and Columbia are casting a line on your next fishing trip