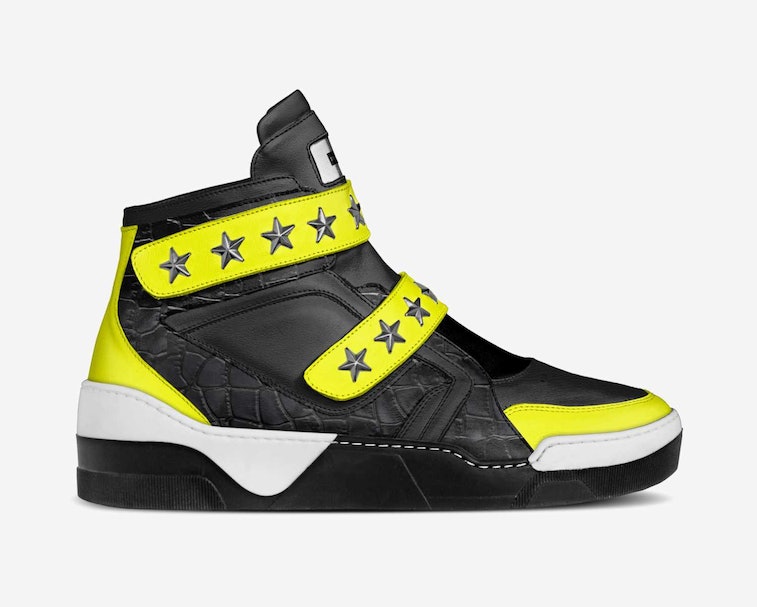 Soulja Boy, the rapper whose primary style contribution until now had been comically oversized T-shirts and drawing on the lenses of his sunglasses, has launched his own footwear brand.

Soulja Stars has been born as the result of a partnership with AliveShoes, an Italian-based platform that offers “professional resources to design and launch a shoe from scratch.” The brand’s first output is the “Fashion Stars Hi Top,” a sneaker that’s precisely as tacky as you’d expect from the man still grasping for attention years after his “prime.” (Somehow, dude is only 31 years old.)

No ornamentation was spared, as the upper is adorned with studded stars, faux crocodile leather, and, in the case of the white pair, an additional zebra print to fully cement the look of the nouveau riche. Each sneaker is hand-made in Italy, which would help justify the $279 price tag — but even that doesn’t keep the shoes from being so offensive and lacking any good sense of taste. The logo is no good either, but at least it’s kept relatively muted with its small appearance on the tongue.

Do you struggle with laces? — Soulja Star’s Instagram page originally posted its gaudy sneakers with the caption “First rapper not able to tie his own shoes” — although the words seem to have been deleted as a result of comments such as “[First] rapper to drop a shoe with [zero] appeal.” Neither description is close to the truth, though, as Kanye West and Yeezy dropped a bizarre laceless sneaker/moccasin quite recently, while plenty of other rappers-turned-shoe-designers have also failed to generate appeal from anyone with a keen eye.

Three color variants for Soulja Stars’ Fashion Stars Hi Top have already been revealed, including a bright green pair and another in black, yellow, and white. Picking the best of the lot is kind of like having to choose which STI you’d like most, but at least you’ll get a certificate for your limited-edition sneaker to commemorate the worst footwear choice you’ve ever made — should you decide to go down that road, of course.