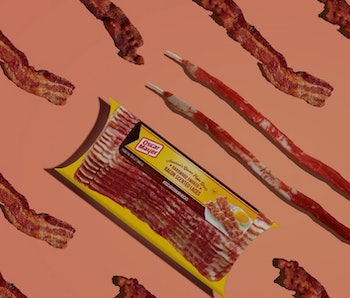 While Nike’s Air Max 90 “Bacon” reissue can’t be eaten, the exclusive shoe has sneakerheads drooling. The silhouette, originally launched in 2004 alongside NYC sneaker boutique Dave’s Quality Meat, released this morning — but if the SNKRS app screwed you over, there’s hope for more breakfast-esque sneakers. Thanks to Oscar Mayer, any shoe of yours can boast a “Bacon” theme with the brand’s bacon-scented shoelaces.

For a brand best known for hot dogs, bacon, and most notably, its Wienermobile, Oscar Mayer has never ventured into the world of sneakers. Its new pork-inspired shoelaces, however, coincide perfectly with the release of the aforementioned AM90 Bacon, and would only add to the reissue’s mouth-watering design and packaging. Of course, the scented laces can be used on any shoe — just make sure no dogs mistake your footwear for a delicacy.

You wear what you eat — To achieve the most realistic bacon smell, the brand scented its laces with real Oscar Mayer Hardwood Smoked Bacon. Megan Lang, associate director of Oscar Mayer, told Hypebeast, “There are few things better than the delicious smell of freshly cooked Oscar Mayer Bacon, but you shouldn’t have to turn on the stove to fill your nostrils with the heavenly scent… We know bacon lovers can’t get enough of it, so we’ve created these bacon-scented laces to give fans the chance to carry their bacon love everywhere, whether they’re styling the hottest new sneakers or sizzling up an old pair of shoes.”

Even if the scent doesn’t waft up to your nose while wearing the laces, you can still look down and enjoy their hyper-realistic bacon design. Featuring a streaked red base with white accents — akin to fat marbling on a slab of bacon — the laces are pretty convincing.

Campaign imagery sees the shoelaces photographed next to a package of Oscar Mayer’s bacon, forcing consumers to do a double-take. White aglets might be the only cue reminding sneakerheads the laces aren’t for consumption — no matter how tasty they smell.

Bring home the bacon — Securing a pair of these bacon-scented laces might be even harder than scoring Nike’s AM90 Bacon sneaker, though. Much like SNKRS’ lottery-based draws, interested consumers have to depend on luck to steer them towards a W.

If you’re looking to add the sizzling shoelaces to your collection, Oscar Mayer will be hosting a raffle running from now until April 1. To enter, tweet at the company using the hashtags #OscarCookMyKicks and #Sweepstakes. On April 2, 1,500 lucky winners will bring home the bacon (laces). Talk about a prime cut.