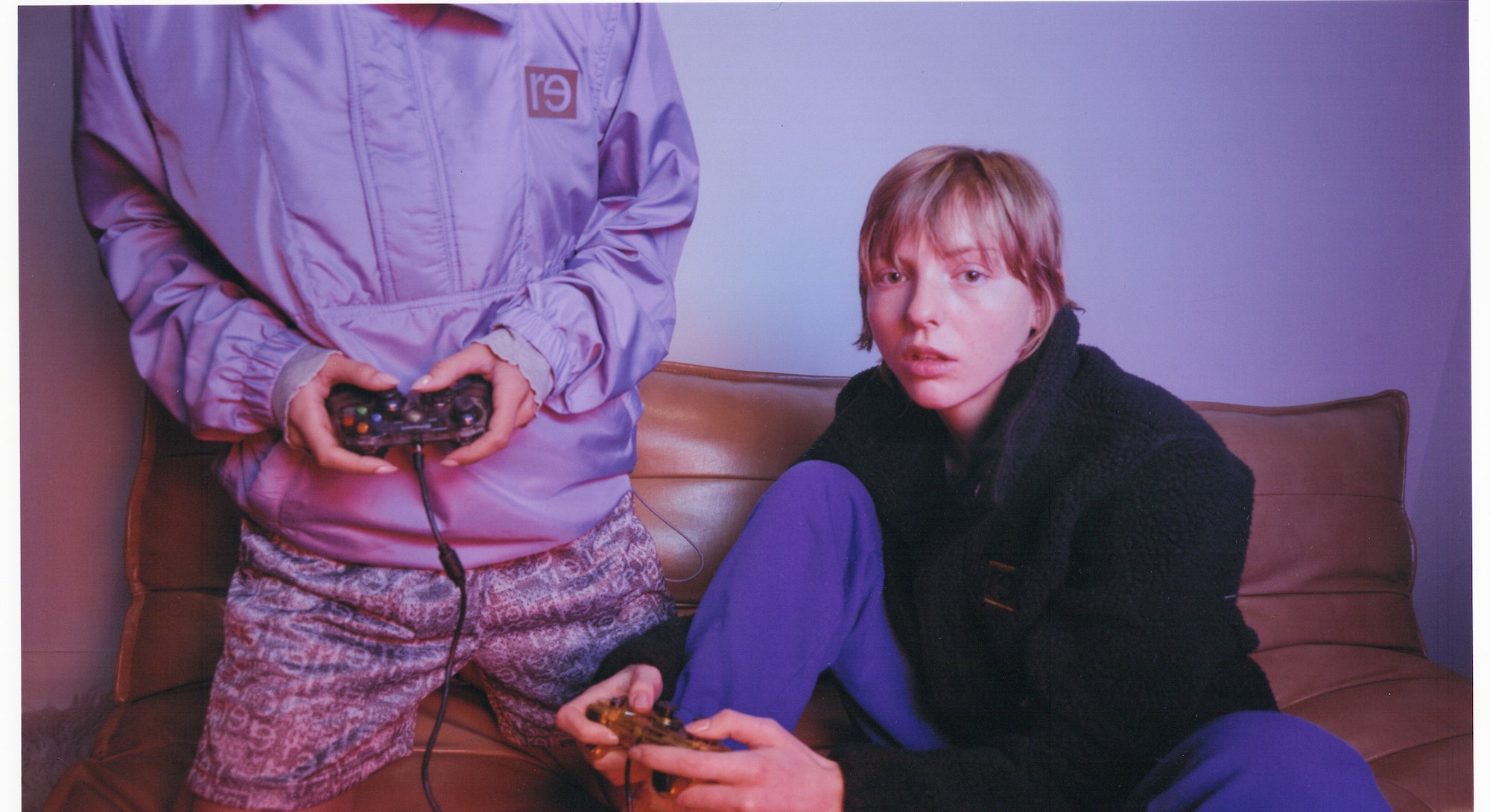 For Press, a forward on the U.S. women’s national soccer team as well as Manchester United, building a collection around video gaming posed a learning curve. “When our creative director pitched [the idea], I was like, ‘No, I don’t play video games.’ [Laughs] ‘I don’t like this concept, bring me something else!’” she recalls. “A year later, here we are with the ‘Gamer’ collection. So, you can see how that [debate] went.”

The Spring collection, awash in gamer-meets-raver vibes, most directly reflects Heath – re—inc’s creative director and one of USWNT’s resident gamers, according to Press. “There’s a bit of a tie between athletes and gaming,” Press adds. “That’s a way that a lot of [our teammates] like to decompress – playing FIFA, or Zelda.”

Ultimately the gaming motif works as an extended metaphor, illustrating gender dynamics that are anything but imaginary. “The larger idea we wanted to get across was the similarities between what we experience as athletes, with our own fight for gender equity,” says Press. Indeed, it’s hard not to read allegory into the “Gamer” collection: As the fictional backstory designed to accompany it goes, four “Queens” must fight for progress in a gamified realm, sneaking into “Mt. Regular” and challenging “a band of resentful Overlords.”

U.S. women’s soccer is in itself a striking gender-equality narrative: That aforementioned triumph – the 2019 World Cup win, their second in a row – elicited not only global fanfare, but “equal pay” chants from fans in attendance. (At the time, several players, including Rapinoe, were fighting gender-discrimination lawsuits against their employer.) These competing realities illustrate the glacial pace of material progress, even in privileged spaces, i.e. professional sports.

“The larger idea we wanted to get across was the similarities between what we experience as athletes, with our own fight for gender equity.”

As much as the “Gamer” narrative may wink at the IRL players’ trajectory, re—inc’s very business model disrupts business-as-usual in sports. Without a corporate daddy à la Nike or Reebok, the brand derives both athletic and organizational life force from its founders. All four share the title of CEO, with Heath also serving as creative director. “That’s really what re—inc is [all about],” explains Press, USWNT forward and re—inc CEO. “[It’s] a place for us to create, and share our lives directly with our community, without needing to rely on a sponsorship or another company to tell us how we can or cannot express ourselves.”

For Spring, they went for graphic cubic fonts and loudly web-1.0 hues, as well as analog gear (skateboards) and knick knacks (playing cards). More than cultural homage, the nostalgia-tech aesthetic enables a kind of corrective albeit ahistorical fantasy. Case in point: the “Gamer” playing cards, in which kings, jacks and aces are replaced with – you guessed it – queens. “There are only queens in this deck, and you get to assign their value,” Press says of the updates, each modeled after one of re—inc’s four founders. “The idea [is that] playing card structures are embedded with sexism, so we wanted to do away with that.”

As indicated by the “Queens v. Mt. Regular” plot, they also wanted to invert gendered video-gaming tropes. “In researching [for the collection], every video game I came across seemed to [center on] a woman in peril. Like, the notion that Mario is going to save Princess Peach,” Press observes. “You don’t have to be a gamer to see how severely outdated that is, in my opinion.”

For Press, gaming research only reaffirmed how systemic and intractable sexism really is. “A lot of what I experience as a woman is micro-aggression, which you don’t necessarily notice in the moment,” she says. “But in video-gaming, it's actually so obvious and blatant...Because the arguments we [athletes] hear – that men are physically stronger than women – [don’t apply]. So, the fact that women are equally underrepresented in the video-gaming space just proved to me again how irrelevant arguments like that are. It’s all societal.”

Such hard-earned insights are implicit in re—inc’s dogged campaign against inequity. But so is the enduring possibility of change, as indicated by the group’s grassroots causes. These have included voting rights, migrant rights, and PPE distribution, in addition to this season’s partnership with Black Girls Code. “When you look at who’s creating the games, and more generally at math- and science-based industries, you see the problem,” says Press. “That there’s no diversity of thought in those spaces, which is the case for a reason. That’s the status quo that we’re challenging.”

The “Gamer” collection also offers a paradigm-shifting alternative in the form of NFTs. Signified by the aforementioned playing-card designs, the tokens, available through OpenSea, embody the re—inc squad both visually and in spirit. “[NFTs] cut out the middle men; [they’re an alternative] to getting all one’s value through an employer,” explains Press. “And part of why we started re—inc was to do just that.”

With her newfound tech savvy, will Press ever join her teammates on the virtual playing field? Not likely: “We’re in FIFA, so [I get why] a lot of them do like to play FIFA,” she says. “But I think that would feel weird. I can’t even watch movies where someone’s playing soccer…[I’d rather be] with Mother Nature.”

This article was originally published on April 23, 2021