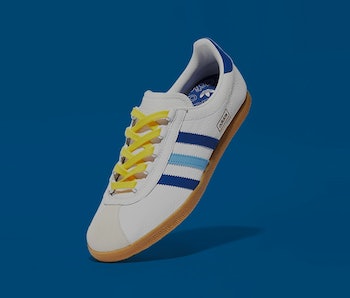 Wes Anderson visual style is most likely the most recognizable in all of film, and that includes his immaculately dressed characters. Costume designer Milena Canonero can take credit for the consistently great fits, as she’s worked on every live-action Anderson film since 2004’s The Life Aquatic With Steve Zissou.

That film kept the wardrobe simple with the entire crew of the Belafonte wearing the same uniform, and now the sneakers worn in pursuit of revenge against the jaguar shark will become available to the public for the very first time. London based sneaker boutique Size? is collaborating with Adidas to bring to life the Trimm Star seen in the film.

The faithful recreation sees navy and baby blue striping on the white leather upper to go along with yellow laces and a gum bottom. While not as iconic as the Superstar or Samba, the Trimm Star silhouette dates back to 1985, when it debuted Adidas' "Ghilly Lacing System" that would appear on several other sneakers throughout the decade. It was a more obscure choice to include in Life Aquatic, but one that would make the film more inextricably linked with the shoe than it would have any other.

Only a few pairs previously existed — Adidas originally made 20 pairs of the Life Aquatic Trimm Star to coincide with the film’s release, which had been the only true recreations to exist outside the Anderson universe until now. The Adidas Rom also given the same color treatment along with a “Zissou” golf foil stamp in 2017, when just 100 pairs were made available at the We Love Green festival in Paris.

Size?’s release of the “Zissou” Trimm Star should mark a welcomed opportunity for both sneakerheads and Anderson fans who may find themselves suddenly more enchanted by sneakers than they had been before. To have win a chance of purchasing the pair for ~$123, you’ll have to enter a raffle through Size?’s dedicated “Launches” app prior to 4 a.m. ET Thursday, November 4.