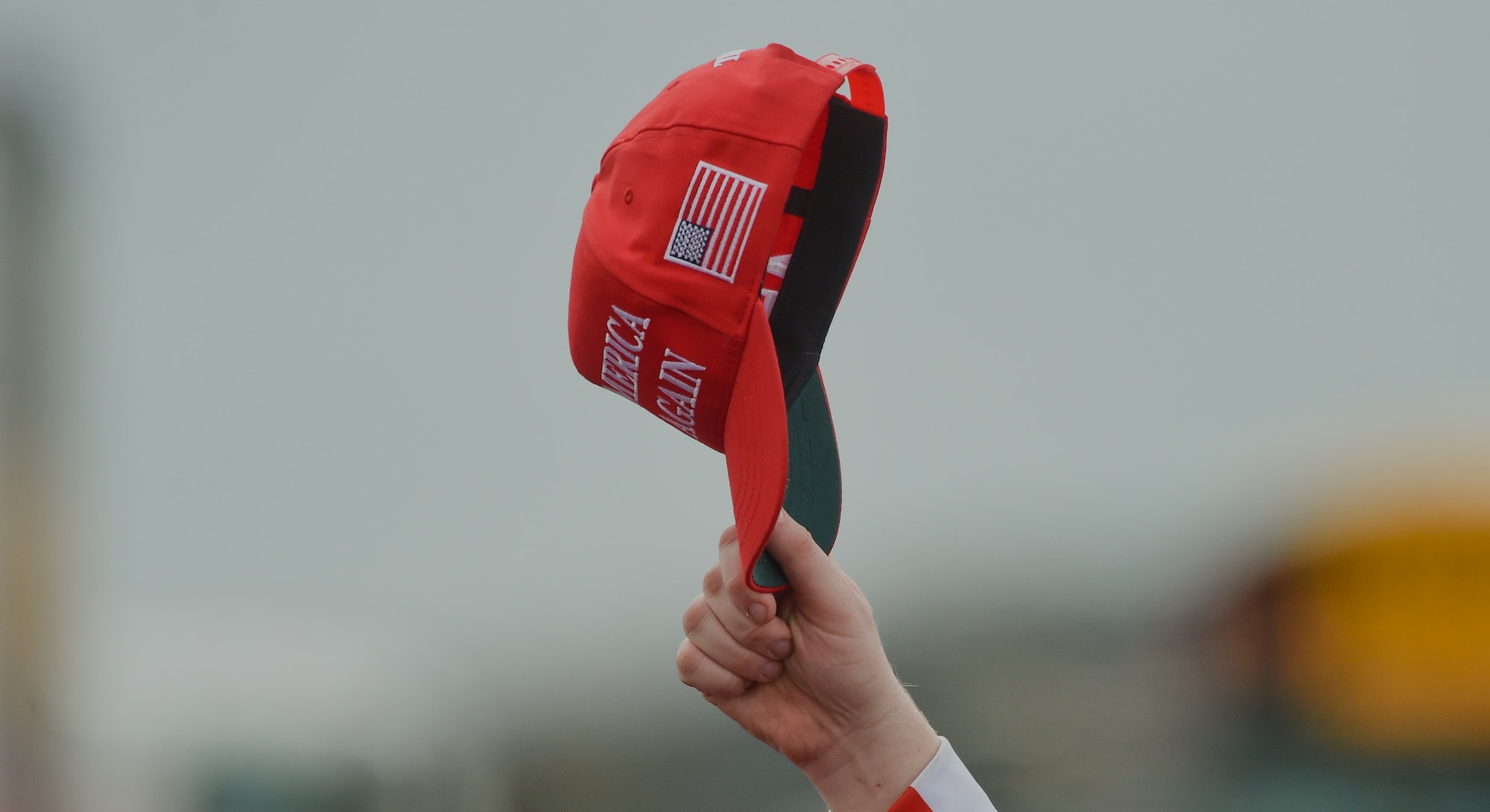 He didn’t even have a campaign store at the time, though that didn’t stop his supporters from trying to find a way to get a matching cap — online or anywhere they could. The red hat and its infamous "MAGA" slogan quickly became synonymous with hatred, racism, and Q-Anon conspiracies. Then came the parodies.

Thanks to Trump, something as simple as wearing a red hat is now polarizing. In fact, seeing one in public immediately heightens my senses until I’m close enough to read the hat’s message. Is it one aligning with Donald Trump? Or is it one making fun of him? Over the past four years, we’ve seen a multitude of spins on the slogan. “Make America Gay Again.” “Make Donald Drumpf Again.” Even “Make Red Hats Wearable Again.”

Whatever message you're trying to get across, whether it's a seemingly innocent joke or a marketing scheme, there’s probably parody merchandise for it. But can we really parody such an oppressive symbol, or does that just add to the tyranny?

First, his inability to keep from saying the most ridiculous and offensive things has made Trump, and consequently, his slogan, a global phenomenon. A parody only works well if people are aware of what you’re referencing. And then, because of his distasteful, spray-tanned nature, the President is a perfect character to make fun of. While he’s given the entire U.S. more grief than laughs, his campaign team has become our greatest entertainment. Between Rudy Giuliani’s dripping hair dye to the President's attempt to preemptively pardon his children, it seems the Trump team has decided to go out with a bang — the clown gun type.

Trump's blunders have become so ridiculed that even "Four Seasons" Total Landscaping, the location of a press conference where Trump's team claimed election fraud despite no evidence, made its own MAGA parody merch. Despite the laughable errors, it's somewhat surprising the Trump squad has dragged on this long considering a member throws another under the bus almost every day. After the election, we hoped Trump and his cronies would disappear alongside the glaring red hats, but the whole team seems to have received the same steroids Trump was fed during his COVID-19 treatment. Taking into account the lifespan of MAGA, should we continue to riff off of its hostile message?

We’re not saying you should stop making fun of President Trump — have at it while you can. His slogan, on the other hand, embodies animosity for basically anyone outside the Aryan race. While it might’ve been funny at first, parodying what’s become a message of hate now seems a blow as cheap as Trump’s hair dye.

Consider this parody hat — sold over 16,000 times on Etsy — that reads “Made Ya Look. Black Lives Matter." While, sure, it does bring attention to the issue of racial injustice, it also trivializes the statement in the same way MAGA has been trivialized. The difference here is that instead of being a “gotcha” moment for Trump supporters, the parody hat takes away meaning from the original BLM statement.

The hat alone is a message of hate

In August, Lebron James wore a similar modified MAGA hat to an NBA news conference. This one had MAGA’s “great again” crossed out and read instead, “Make America Arrest the Cops who Killed Breonna Taylor.” While some praised him for bringing attention to Taylor’s case, others called the hat “tone-deaf.” It’s important to say her name, not commercialize it.

Again, I ask: What did this hat accomplish? Unfortunately, they don’t seem to be the clever twist on words many think they are. To be fair, these two messages are probably the worst of the parody MAGA gear, mainly because on top of being performative, what they stand for is exactly what Trumpies are against. That’s just what makes them appealing to consumers.

Some may still be asking, "What’s the harm with other modified MAGA gear?" Well, There’s not any direct harm, per se, but wouldn’t we be better off just ditching Trump altogether? It would be the ultimate insult for someone who feeds off of any attention he can get.

Trump’s administration will soon be a thing of the past and, as a society, we should make sure MAGA parody gear goes with him. Why would you want to trick somebody into thinking you stand for his presidency, even for a brief moment? Just think of when you’ve seen the hate hat, then ask if you want to be linked to that. Recently, it’s appeared at the Million MAGA March, where the Proud Boys were spotted. It’s also shown up in the Instagram profile pic of the Parkland shooter, and the white supremacist rally in Charlottesville. Yeah, do you really want to be associated with neo-Nazis?

Wearing a MAGA hat — or something that looks like it — announces that the wearer plays for a certain team. A team that lost the championship, and thinks Mexicans are rapists, systemic racism doesn’t exist, and a pandemic was concocted solely to control them. Truly, Trump and his supporters are the opposite of good sports.

The hat means something. Whatever it says, the hat alone is a message of hate, all of Trump’s blatant lies, and violence neatly packaged into a bit of red fabric. So, maybe pass on that parody hat. Make America great again by throwing it out.