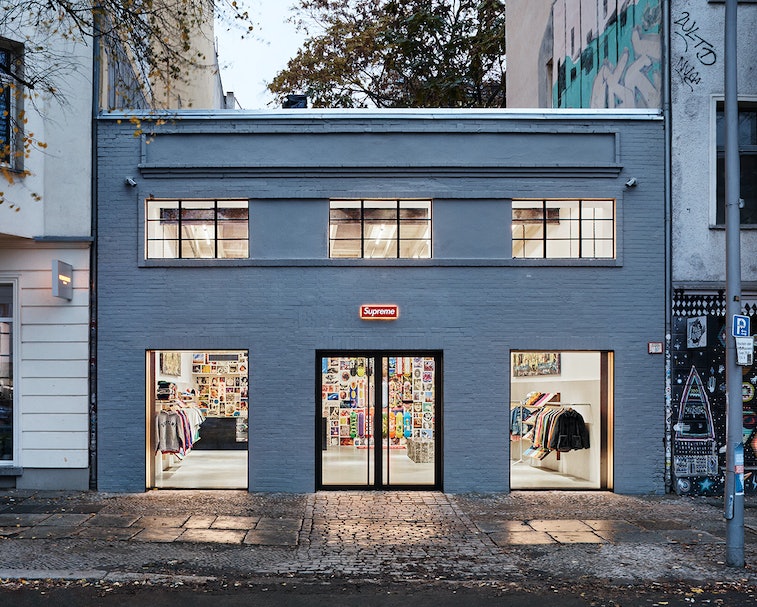 Supreme is saying “Hallo” to Germany with the announcement of a new store opening in Berlin. The New York City streetwear brand’s first German outpost will open tomorrow, November 11 — which means a new Box Logo T-shirt to commemorate the store is right around the corner.

The Berlin store marks the second new opening for Supreme this year, following the brand’s first Italian location coming to Milan in May. Typically, Supreme coming to a new locale is quite rare — the most recent expansion had been to San Francisco in 2019 — but VF Corp.’s $2 billion acquisition of the brand could mean additional stores are beginning to pop up more frequently than ever.

Supreme Berlin will be at Torstraße 74, which is right in the center of the German capital. The store is relatively small, akin to Supreme’s original Lafayette flagship, with the primary decoration coming as a model fighter plane hanging from the ceiling.

It’s Bogo time — Supreme releases a special-edition Box Logo T-shirt each time it opens a new location, and Berlin should be no different. As of publishing, no images of the tee have been leaked — so we may have to wait until they go on sale Thursday to know what they look like.

For those not in Berlin, Supreme typically makes its locally themed Box Logos more widely available the following week — and we can likely expect it to release online on Monday, November 15, at the earliest.

This week was already proving to be a major moment for Supreme prior to the announcement of the opening for its Berlin store. On Thursday, the brand will release its long-awaited collaboration with Tiffany, the latest step into luxury for the nearly 30-year-old streetwear brand. Some longtime fans may say Supreme is dead, but the moves it’s making suggest otherwise.