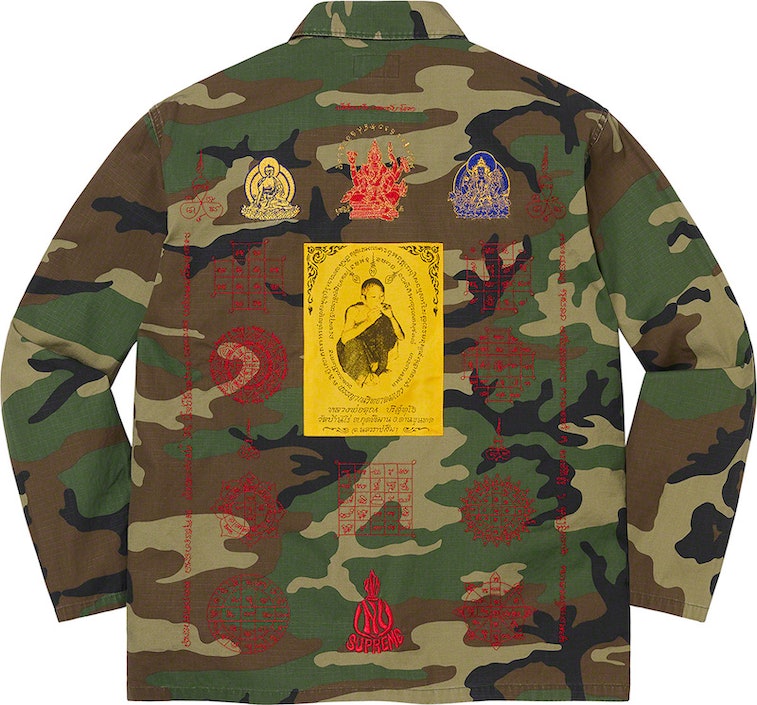 The Thai government is reportedly considering legal action over a Supreme jacket previewed for its spring / summer 2021 collection.

At issue is an image of the late monk Luang Phor Koon that appears on the camouflage "Blessings Ripstop Shirt." While ownership for the 2003 photo isn't clear, it could belong to the Wat Ban Rai temple where Luang Phor Koon served. The temple could also have claim over the yant script, a sacred tattoo design for Buddhist monks and Brahmin holy men, that surrounds the image on the rear of the shirt.

Thailand's National Office of Buddhism said last week that it will submit a letter to Supreme to protest its use of the image and tattoo design, according to the Bangkok Post. The shirt no longer appears on Supreme's website, suggesting it could have already been pulled from the release schedule.

The Thai government could be overreaching — Despite the National Office of Buddhism's protests, the Bangkok Post reports neither the image of Luang Phor Koon nor the yant script are registered with the Department of Intellectual Property. Wat Ban Rai holds the rights to 21 items related to the late monk, but the popular image of him squatting and smoking isn't among them.

Wat Ban Rai, for its part, hasn't yet decided if it wants to take any action. "We will discuss the issue and find out what the brand's purpose is," temple manager Tawatchai Sansprasit said in a statement, according to the Malay Mail. He also confirmed that the temple didn't receive any written request from Supreme.

Boonterd Wongkanchanarat, nephew of Luang Phor Koon, told Malay Mail that it's wrong for Supreme to profit off of his uncle's likeness. "If it's for a public event for a good cause, I wouldn’t object," he added. "But this is a clothing brand, a private business, and they didn’t even ask for our permission to use it."

Supreme should probably back off — Even if the legal case is shaky, Supreme may be best off standing down as a show of respect to the Buddhist temple. There's a case to be made for cultural appropriation, and the optics of Supreme profiting off of the image and script will probably be fraught going forward.

If a lawsuit were to go forward, Wat Ban Rai would have to prove ownership for the photograph and script. The latter could be considered a work of art, and under Thai copyright law would only be protected for 25 years after its creation.

Nick Redfearn, deputy CEO and enforcement head for the intellectual property firm Rouse, said the photograph is "probably protected by copyright, but subsistence and ownership may need to be proven yet."