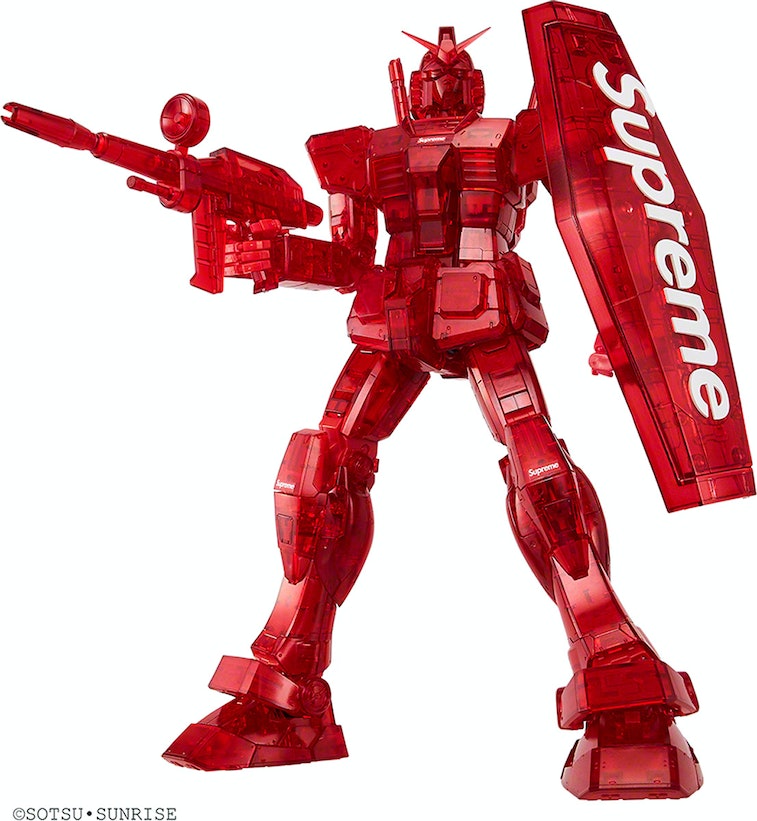 This week will bring the release of one of Supreme’s most anticipated accessories of the season.

The New York City streetwear brand’s Gundam model kit is slated to drop as as the perfect intersection for hypebeasts and anime fans. A 1/100 scale figure sees the RX-78-2 Gundam rendered in semi-translucent Supreme red, complete with logos on the shield, knees, and chest. Multiple sized stickers will be included with the kit to allow you to choose how Box Logo-crazed you want your Gundam to be.

Supreme has a history of releasing collaborative toys and models, including a Chucky doll, Hot Wheels, and a pregnant female anatomy model that I once had the pleasure of watching a 30 something-year-old man put together in my office. What they all have in common is that they’re utterly ridiculous — but that’s what defines Supreme accessories at their best.

A hyped year for Gundam — Gundam fans are getting their second major streetwear drop of the year following Nike’s official collaboration with Bandai on the Dunk High. After months of delays, Nike released two versions of the sneaker, one for the Unicorn suit and one for the banshee, done up with cut-out detailing and a protruding, removable Swoosh.

Somewhat surprisingly, despite the sneakers being amongst the most creative Dunks Nike has ever made, resale prices for the two Gundam Dunks are extremely low. Each can be had for around $300 on platforms such as StockX, which is roughly half of what some of the most hyped Dunks typically fetch.

For Supreme’s take on Gundam, you can pick up the model kit as part of the brand’s weekly drop at 11 a.m. ET Thursday, December 16, through both its website and physical stores. A price has yet to be confirmed for the kit, but we can likely expect it to come in somwhere between $100 and $200.

Somewhere soon, a hypebeast or two will be putting together a model for the first time.

More like this
Ian Campbell
6.14.2022 1:00 PM
Father's Day
The 6 best Lego sets to build with your dad this Father's Day
Maya Ernest
5 hours ago
Rebooting
How old tech like iPods have become hot fashion accessories
Maya Ernest
6.21.2022 6:30 PM
Style
Tag Heuer’s smartwatches let you flaunt your NFTs on your wrist