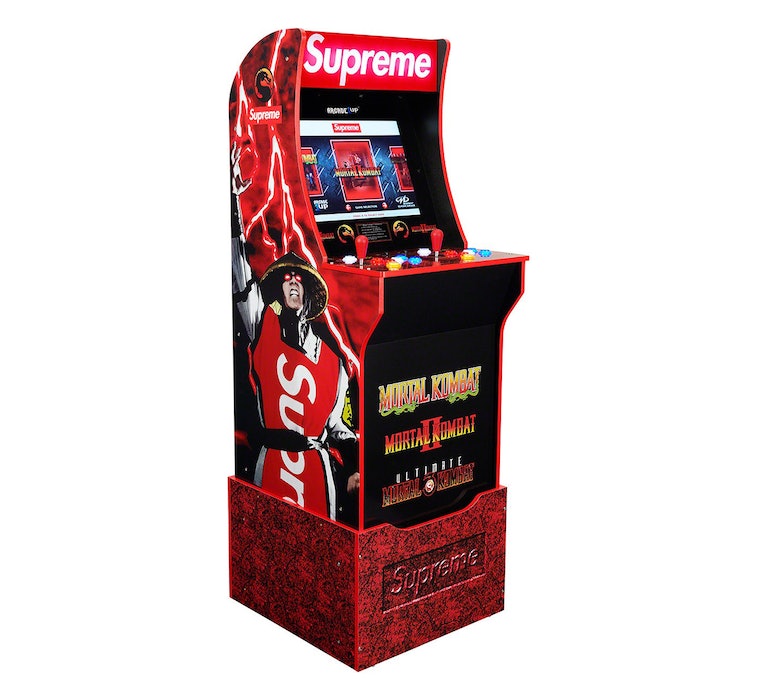 Supreme's Mortal Kombat arcade cabinet was one of the most eye-raising items revealed in the brand's FW20 lookbook, and it's finally slated to release this week. Completing the finishing move that is acquiring the machine will be a near-impossible feat, as we're likely only looking at around a dozen units being released to the public.

Supreme is still scant on details for it's dual-branded Mortal Kombat cabinet, which sees Raiden wearing a Box Logo jac. In 2018, Supreme made 100 pinball machines that sold for $11,000 each — but only 12 were made available to the general public. The rest were sold to family and friends, including the recently shuttered Lower East side bar Max Fish. That very machine is now up for auction at Christie's, where the current bid is $22,000 and it's expected to fetch up to $30,000. An unopened unit also sold for $25,000 in October on eBay.

The promo video is awesome — Supreme confirmed this week's release through the Instagram video above, which includes senate testimony about the game from Joe Lieberman in 1993. Zoomers, who constitute a large part of Supreme's consumer base, may not remember how controversial Mortal Kombat once was. Lieberman's cries over the game's violence are almost cute in their antiquation, as if we haven't all grown up surrounded by much more real violence in television and movies that also serves as propaganda for the United States war machine.

On the specs front, Supreme's MK cabinet comes with a 17-inch LCD screen with an illuminated Box Logo headboard and a branded riser.

Try your luck — As always, Supreme's weekly drop goes down online at 11 a.m. ET on Thursday, December 10. The pinball machine wasn't available for purchase in stores, probably because of, you know, the bulk. If you've got five figures to blow, head to Supreme's site and hope you have the luck to match your wealth.

For the rest of us, we'll just have to hope there's another punk and skate institution that gets ahold of the arcade game for us to play. Mortal Kombat would have looked great next to the Supreme pinball machine, but COVID-19 took away Max Fish and that dream.