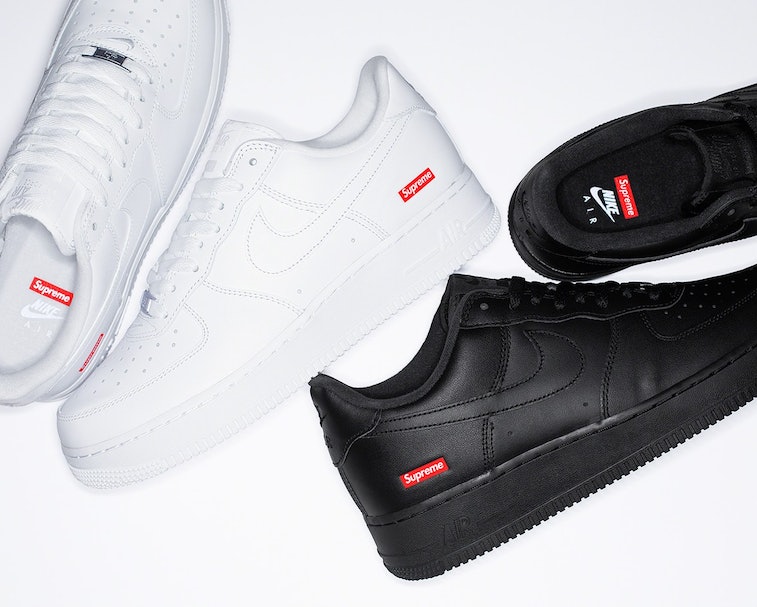 When Supreme's latest Nike Air Force 1 was officially announced, it was panned for its simplistic design. A small, debossed box logo on the lateral heel isn't exactly cutting edge, and the brand was derided for phoning it in. But now, with proper release details, the sneaker can be seen in a new light.

Supreme for all — Supreme announced today that the new AF1s will restock regularly throughout the seasons, beginning with a release this Thursday. That places the kicks alongside other Supreme regulars like the T-shirts, boxers, and socks — all from Hanes. You won't need a bot or a quick trigger finger to make them yours.

It's a fitting development because the white Air Force 1 low is basically the white T-shirt of sneakers. Everyone should have a pair in rotation, and they go with everything. The minimal branding on this pair keeps that same energy. Because they'll be so easy to purchase, and they'll come at a palatable $96, there should be no reason to treat them preciously. Wear them to the ground, re-up, repeat. That's how an AF1 should be used, and it's refreshing to see Supreme treat it accordingly.

Sorry, resellers — Another advantage: this will bone the resellers. Resale prices for Supreme have been consistently lower for the past several seasons, likely due to a combination of decreased demand and an increase in supply since the Carlyle group acquired a 50-percent stake in the brand. The Carlyle group isn't in the business of rarified cool — it's into making money. More product needs to be sold, and a regularly available AF1 is a perfect way to make that happen. Resellers who were looking to make a quick buck won't get any of the benefit.

Take a deep breath and buy when you'd like — Both the white pair and a black version, the latter of which has been vilified, will hit Supreme's web and physical stores this Thursday. They may still sell out, but don't let that induce panic. Simply wait for the restock and call it good. We're going to see something novel happen: those who actually want the sneakers will get to wear them. And those who don't finally have no reason to bother.