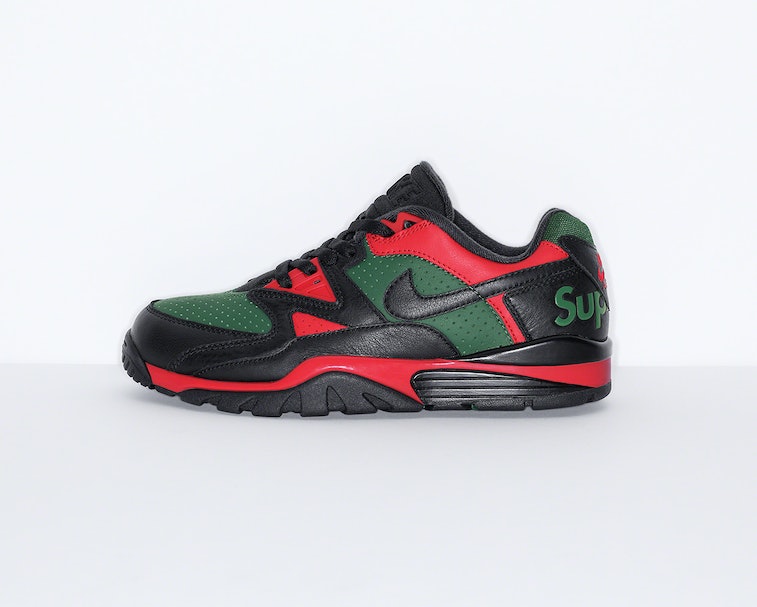 Supreme has unveiled its latest Nike collaboration, and this time it doesn’t just consist of a new color scheme. The New York City streetwear brand has taken on the Cross Trainer Low, a brand new revision from Nike’s Air Cross Trainer series. Specifically, the sneaker jumps off from the Air Cross Trainer 3, which itself took cues from Bo Jackson’s iconic Air Trainer SC.

While Supreme typically works with existing Nike sneakers, the new collab also diverges from the typical formula by eschewing a color scheme highlighted by the brand’s signature shade of red. Instead, the Cross Trainer Low will release a white, red, yellow, and green variant along with a black, red, and green version reminiscent of the Pan-African flag.

As always, Supreme’s Cross Trainer will release as part of the brand’s weekly drop at 11 a.m. ET Thursday, October 14, through both its website and physical stores. The price has yet to be announced, but expect that information to surface by Wednesday at the latest.

The story of Nike cross-training — Legendary designer Tinker Hatfield was behind Nike’s first Air Cross Trainer, and he had the idea for the shoe after noticing gym goers carrying multiple pairs of shoes for different exercises. Hatfield sought out to make a shoe lightweight enough for running but with enough stability for court sports like basketball and racquetball.

The Air Trainer 1, as it was first called, launched in 1987 and was an immediate success for Nike. Bo Jackson, who famously played professional football and basketball, led the shoe’s ad campaign before receiving his own signature model and was the perfect representative for its cross-over function. Pro tennis players John McEnroe and Andre Agassi also wore the Air Trainer 1 in competition, with McEnroe debuting the sneaker a year early without authorization.

Supreme’s take on the Cross Trainer series looks to be an Air Trainer 3, originally released in 1991, with a brand-new midsole and outsole and its name stamped across the heel. And while it may prove polarizing among hypebeasts who wanted a silhouette more fussed over today, it’s worth remembering that Hatfield had his own doubters within the company when he wanted to make his cross trainers.