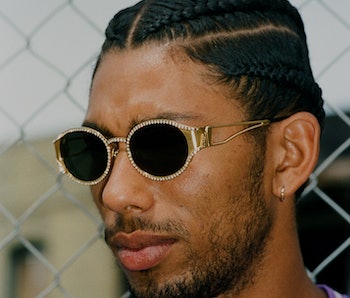 A trio of brands is showcasing different approaches to streetwear through their latest sunglass releases. Supreme, Noah, and Brain Dead have all shown their spring/summer lineup, encompassing a range from flamboyant to classic to downright weird. While we already put together a selection of some of the best sunglasses earlier this spring, these three releases alone should have something for everyone in the streetwear set.

Let's start with the classics — Noah has teamed up with French eyewear brand Vuarnet for the second time in three years and has honed in on two silhouettes: the wayfarer-esque District and a rounder frame called the Atlantic. Both are in line with the brand's more heritage approach to streetwear and menswear, and Noah says Vaurnet was at the top of the list for brands it wanted to carry in its store because of its "perfect union" of quality and style.

The District was culled from Vuarnet's archive and first introduced when Noah began collaborating with the brand in 2018. It returns in the ever-versatile black and tortoiseshell, as well as a more modern white frame with purple and orange gradient lenses. The Atlantic, created just for this collection, keeps it timeless with only black and tortoiseshell. Priced at $265 and $278 respectively, these are the shades you buy with a lifetime in mind and not just for a seasonal trend. You can buy them right now through Noah's site.

Supreme peacocks — Just as Noah keeps it characteristically mature, Supreme goes with the level of boisterousness you've come to expect. Loudest of all are the Miller frames, pictured up top, which are set with jewels in black, gold, and silver. The other two offerings, Royce (below left) and Stretch (below right), are rectangular frames —the latter of which channels the early 2000s, especially with the two reflective lens options. The former is more contemporary, with cow print and a neon green as the standout colors.

Supreme's sunglasses are often polarizing — some Instagram commenters have referred to them as "gas station shades" — so it's a crapshoot on how quickly they'll sell out when they go on sale Thursday. If they veer on the pricier side, which is very much possible because each is made in Italy, expect them to sit for longer.

And finally the weird — Brain Dead's eyewear, which released Tuesday, are the most capital-f Fashion. The new Kurata frame is weird and wavy, made only more fetching with tri-colored tortoiseshell in black, brown, and blue. Considering they're handmade of acetate, $175 is a pretty good deal for these far-out frames.

Most of the other highlights have already sold out, but the thick and blocky Tani shades are still available in black for $175. Consider them only slightly less modest and just as dynamic.

And if you're having a hard time choosing between these three brands, perhaps consider that only one of them is owned by The Carlyle Group.