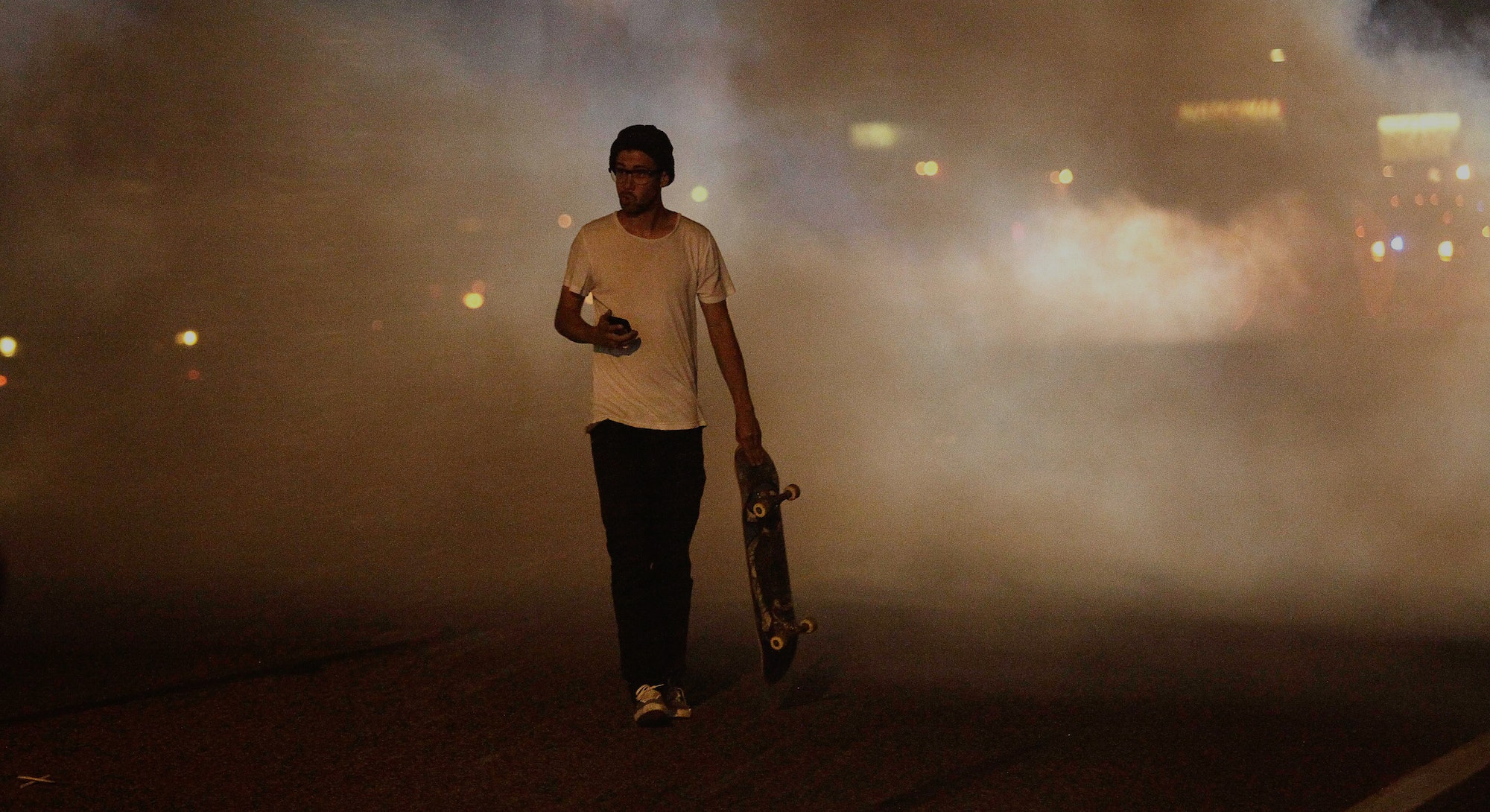 As police officers across the United States used state-sanctioned violence against Black Lives Matter protesters, Supreme emerged as an unexpected part of the narrative on social media.

The New York City streetwear brand has a history of anti-establishment messaging, which is in sharp contrast to its 50-percent stakeholder. In 2017, The Carlyle Group acquired approximately half of the brand for around $500 million — an eye-opening development in streetwear’s rise from a subculture to a cultural movement with a much larger audience. But as observers pointed out then, the private equity group’s unsavory history added baggage to the landmark deal.

Since its formation in 1983, The Carlyle Group has profited handsomely off of war due to its numerous investments in the defense industry. More immediately, critics of both Carlyle and Supreme have tied the two parties to Combined Systems Inc., a manufacturer of tear gas used by police departments across the country. While Carlyle did acquire a minority stake in CSI 15 years ago, the firm has since divested, according to a Market Watch story from 2019. And yet, the link between the two continues to be a topic of debate on Twitter.

The proliferation of this connection can, at least in part, be traced back to a since-deleted blog post from Monster Children. The quarterly magazine issued a retraction clarifying The Carlyle Group’s relationship with CSI, which it erroneously reported as owning outright and may have led to confusion for many social media users. In the retraction, Monster Children also reported that Carlyle still owns a residual equity piece in a trust it cannot exit but does not profit from.

The question is this: does The Carlyle Group distancing itself from CSI and selling off its assets absolve Supreme of hypocrisy? While the firm may no longer profit off of supplying police departments with equipment used to escalate conflicts with peaceful protesters, that doesn’t change the fact it once did. It would be naive to think Carlyle distanced itself from CSI due to some sort of moral righteousness. The private equity group’s model is predicated on investing in companies and selling them off later for high profit margins.

It’s disingenuous for Highsnobiety to run a headline saying, “No, Supreme is not connected to tear gas.” More accurately, Supreme is not directly tied to tear gas at this time. A source familiar with Caryle's investments told Input that the fund with a stake in CSI closed in 2017 but had not earned any income from the law enforcement equipment manufacturer since the year prior. They couldn't indicate exactly when the relationship ended in 2017, though they said there was no crossover with Carlyle's partial acquirement of Supreme.

Pointing to The Carlyle Group’s responsible investing guidelines is also a dubious defense. Sure, the firm may now take into account “environmental, public health, safety, and social issues” when evaluating potential investments — but that doesn’t erase the billions Carlyle has already made from the defense industry. Can you really claim nobility when the platform you stand upon was built with the profits of war?

As Hasan Minhaj pointed out in a viral episode of Patriot Act explaining Supreme in 2018, The Carlyle Group then owned a 23 percent stake in the supply chain management company Wesco. Along with another company called BAE Systems, Wesco provides support for the European Typhoon fighter jet used by Saudi Arabia to bomb Yemen. Carlyle’s relationship with Wesco ended just this year when Platinum Equity completed its acquisition of the company for a deal worth approximately $1.9 billion.

Going further back, one of The Carlyle Group’s most controversial investments was in United Defense, which produced combat vehicles, artillery, naval guns, missile launchers, and precision munitions. According to the Center for Public Integrity, United Defense accounted for 60 percent of Carlyle’s defense business as it secured $5.8 billion in Pentagon contracts. Carlyle would go on to sell the company in 2002, and it did so having established the defense industry as a lucrative avenue for private equity.

The Carlyle Group has profited handsomely off of war

“There have always been [private equities] that went in with management and bankrolled management, Stuart McCutchan, then editor of Defense Mergers and Acquisitions, told the CPI in 2004. “What Carlyle has done differently is they have taken it to a new level both in terms of size and in terms of being committed to an entire sector.”

United Defense, which was later acquired by BAE Systems, can also be held up as an example of government waste. The defense contractor was responsible for the $11 billion Crusader artillery program eventually canceled by Secretary of Defense Donald Rumsfeld, but not before $2.7 billion had already been spent. It endures today as one of the most expensive projects abandoned by the U.S. military.

Outside the defense sector, The Carlyle Group has drawn scrutiny for its investment in nursing homes accused of neglecting the elderly. HCR ManorCare was the subject of numerous complaints, as reported by the Washington Post, including broken bones, opioid overdoses, and bedsores. Its chains saw a 26 percent increase in health code violations each year between 2013 and 2017, a rate three times higher than any other nursing home company in the country.

“It was horrible — my mom would call us every day crying when she was in there,” a daughter of one of HCR ManorCare’s patients told the Post in 2018. “It was dirty — like a run-down motel. Roaches and ants all over the place.”

HCR ManorCare would also be accused of Medicare fraud before going bankrupt in 2017. Its history of scandal — as well as The Carlyle group’s experience in the defense industry — was then used against Bill Conway, son of the firm’s founder with the same name, in his unsuccessful bid for Cook County State Attorney in Illinois. The elder Conway, worth more than $3 billion, contributed $10.5 million to his son’s campaign.

“It was dirty — like a run-down motel. Roaches and ants all over the place.”

Holding The Carlyle Group accountable for its current interests is particularly difficult when it doesn’t disclose its full portfolio. The firm once kept a list of all its investments (past and present) accessible on its website, but the database didn't carry over with a redesign. Our source categorized this change as part of a turn to minimalism and not as an explicit omission. (You can still see the list via archive from June 2017.) Carlyle boasts $80 billion in assets and 181 companies today as part of its private equity division, but good luck finding a full accounting.

Fashion has been a recent area of focus for The Carlyle Group, as 10 percent of its investments over the past decade have been in apparel and accessories, according to PitchBook. Golden Goose, one of the few companies highlighted on Carlyle’s website, was acquired by the firm in a 2017 deal that valued the brand at around $450 million. Earlier this year, Carlyle agreed to sell Golden Goose to another private equity firm, Permira, with the total value reportedly assessed at no less than ~$1.3 billion. Prior investments also include Moncler, of which Carlyle bought 48 percent in 2008 before selling off its stake in two parts three and six years later.

The degree to which you hold The Carlyle Group’s past dealings against Supreme is ultimately up to you, the consumer. As the old Tumblr adage goes, there’s no ethical consumption under capitalism — but the murky world of private equity is an issue new to streetwear, whose very roots are in making a community out of lower-priced clothing.

“We’re a growing brand, and to sustain that growth we’ve chosen to work with Caryle, who has the operational expertise needed to keep us on the steady path we’ve been on since 1994,” Supreme founder James Jebbia told Business of Fashion in a 2017 statement. “Working with Carlyle allows us to concentrate on doing what we do best and remain in control of our brand, as we always have.”

While The Carlyle Group’s past ties to tear gas spread on social media, Supreme announced last week a donation of $500,000 to four organizations tied to fighting racism in policing, the judiciary, and communities at large. But that may not be enough for some to forgive the $500 million it took from The Carlyle Group.