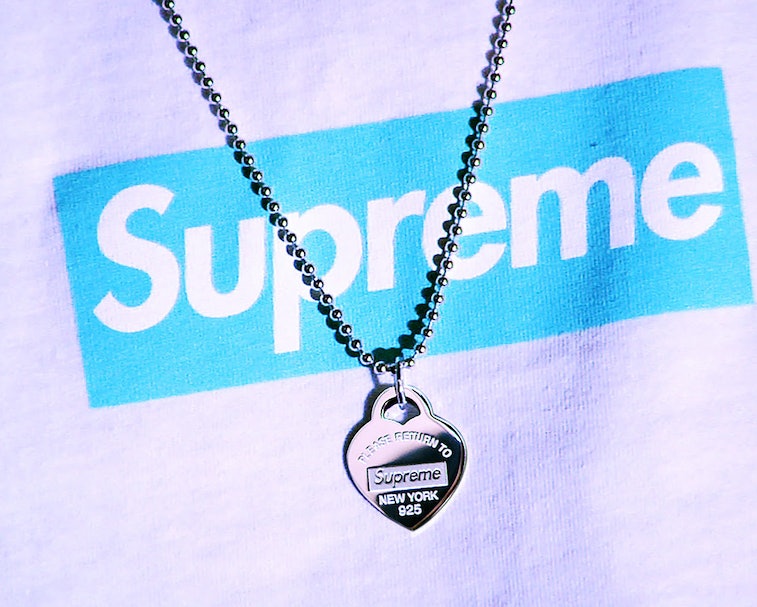 Following months of rumors, Supreme and Tiffany have confirmed they’ll join forces for a landmark collaboration.

In its most serious splash into jewelry yet, Supreme has taken inspiration from the “Return to Tiffany” collection first launched in 1969. A “Please Return to Supreme” stamp featuring the brand’s famous Box Logo appears across a range of sterling silver goods set to test the limits of hypebeast’s budgets this week. Also included in the collection is a very on-trend freshwater pearl necklace complete with an oval shaped pendant.

While securing a collaboration with the nearly 200-year-old luxury jeweler marks a major get for Supreme, the partnership also comes as a boost for Tiffany in its recent efforts to appeal to younger consumers. Having recently been acquired by LVMH, Tiffany rolled out a “Not Your Mother’s Tiffany” campaign that’s proven derisive amongst its older clientele, in addition to a series of ads starring Jay-Z and Beyonce.

Perhaps a Box Log may be more in your budget — While Supreme’s Tiffany jewelry will no doubt be expensive, there’s still one core item that’ll bring a more accessible entry point to its fans. The famed Box Logo T-shirt sees Supreme’s most sought-after mark made over in Tiffany Blue. Actually snagging a tee could still be an issue, as it may just be one of the most covetable Bogo in years, but we can expect it to arrive for the standard price of $54.

The jewelry collection includes a heart-pendant, stud earrings with the same shape, and a heart key ring that unfolds to reveal a pocket knife — the latter of which should prove especially popular amongst the dudes who love Supreme. Joining the pearl necklace is an oval tag keyring, with the assortment completed by a bracelet that spells out Supreme's name with a series of star charms.

As always, the Tiffany collection will release as part of Supreme’s weekly drop through its website and stores at 11 a.m. EST this Thursday, November 11. Pricing details should surface by Wednesday at the latest, and in the months ahead you’ll see the jewelry on the most cash-loaded hypebeasts.