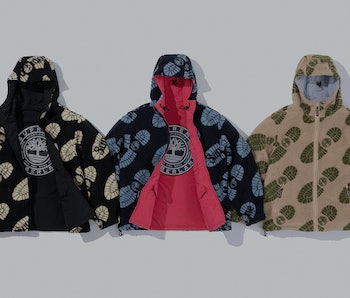 Longtime collaborators Supreme and Timberland are doing things a little differently when it comes to the latter’s classic boots. The highlight of their latest capsule isn’t footwear, but rather a fleece that looks like it’s been trampled in a riot of Timbs-clad New Yorkers.

The instantly hilarious boot tread print is just one half of a reversible ripstop jacket well equipped for winter. Available in three colors — black, pink, and baby blue — the hooded jacket features four front pockets on the ripstop shell with a reflective Timberland-Supreme logo appearing on the sleeve and much bigger on the rear. It can then be flipped inside out to give the jacquard fleece all the glory it deserves

For a full stomped-on fit, the capsule also includes matching and reversible ripstop pants that may just be the warmest thing you put on your legs all winter. Despite no actual boots to be seen, this may just be Supreme and Timberland’s best collaboration yet.

The rest of the gear — For a more muted look, Supreme and Timberland have also put together a small run of apparel and accessories without the boot tread. Dual-branded rugbies are available in all-black, orange and maroon, and two shades of blue that make a strong case for the silhouette as the best sweater you can wear in fall or winter.

Hoodies with the same logo placement as the jacket are also available in five colors, while Supreme’s five-panel hat has been winterized with ear flaps, fleece lining, and a removable ripstop shell. The latter may be far from what you’d expect from your typical winter hat, but it’ll certainly do the trick as temperatures begin to drop.

As always, Supreme’s Timberland capsule will release as part of its weekly drop at 11 a.m. Thursday, October 28. Pick up the gear in stores or online — and then prepare to explain to old people why your jacket looks trampled.