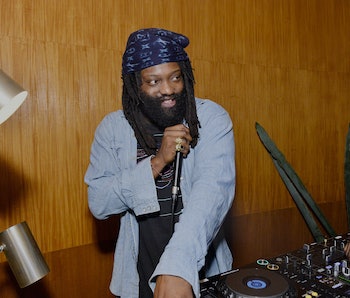 Supreme has named Tremaine Emory, founder of Denim Tears and a close collaborator of Kanye West, its new creative director. Emory started in the position this week, according to Business of Fashion, and will work closely with Supreme’s design team and founder James Jebbia.

Jebbia remains in charge of the business after VF Corp. acquired Supreme in a deal worth $2.1 billion. VF Corp. said in its latest earnings report that it expects Supreme to generate $600 million in revenue for the 2022 fiscal year and that growth will be key to making good on the sizable investment.

Emory has yet to publicly comment on his new appointment, but in an interview with Esquire last year he talked about the similarities between Supreme and his own brand Denim Tears, which he’ll continue to run. “Supreme has put out some really powerful garments about what Black people and other go through in the world — but basically Denim Tears is like African-American sportswear,” he said. “So like, Supreme does every couple seasons, they’ll do like a Malcolm X whatever. My whole line is that.”

Can Emory reinvigorate Supreme? — Through Denim Tears, No Vacancy Inn, and Yeezy, Emory’s work has made him one of the most compelling and thoughtful designers in streetwear and fashion. The recent Denim Tears x Levi’s collaboration has explored the complicated history of cotton for African-Americans, and a luxurious Ugg collab earlier this month served to highlight the culture of Black Seminoles.

Now, working with Supreme, Emory’s challenge will be to keep the brand fresh as it undergoes worldwide growth under VF Corp. Supreme’s luster has been dimmed by the product becoming less hard to come by, and its designs haven’t been quite as exciting in recent years as they were in the past. A new creative director could be just what Supreme needs, and fans will be eagerly awaiting his first collection.