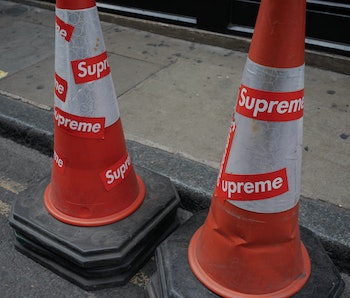 Those wondering how VF Corp.'s $2.1 billion acquisition of Supreme might change the crown jewel of streetwear will now have an idea of what's in store. Steve Rendle, chairman, president and CEO of VF, spoke to Women's Wear Daily about its shiny, new Box Logo asset and reiterated his original message from a November conference call — "We don’t want to mess it up."

"We understand the skill set that sits inside this team," Rendle said in the new interview. "We don't want to disrupt this business. This business is really well run."

Rendle pointed to Vans — one of VF's owned brands alongside The North Face and Timberland — as a success story without major meddling. The Denver-based parent company acquired Vans for $396 million in 2004, and now it's worth $4 billion "without being commoditized or ubiquitous."

Rendle's description may be generous, but the truth remains that the Vans brand hasn't been diluted. It can do collaborations with partners as disparate as Supreme and Winnie the Pooh, and no one questions its skating bonafides.

Don't mess with success — Supreme is expected to add $125 million to VF's revenue in the fourth quarter of 2020 alone. For 2021, VF sees the brand adding at least another $500 million, which would help it bounce back from a drop during the pandemic.

Based on what Rendle is saying, the new revenue source will come from letting Supreme do what it does. "It always makes me chuckle if people think we’re going to come in and change Supreme," he said.

In a kick-off meeting with Supreme founder James Jebbia, Rendle say mutual respect was expressed by both parties. "That is the basis of a really productive relationship," he said, adding once again, "We don't tell them how to run their business."

So what could change? — Supreme now has access to an absolute monster in global logistics, which could lead to increased stock and distribution. Because Supreme operates largely behind closed doors, it's never confirmed what changed when it sold a 50 percent stake to the Carlyle Group in 2017 for $1 billion. But judging by a dip in resale prices, Supreme made larger product runs than it had before.

Beyond the sales, VF benefits from acquiring Supreme by getting insight by the master of the drop model. Once a matter of necessity, Supreme's weekly and limited product releases have become the envy of the industry, with luxury brands trying to create a similar fervor for its launches.

The North Face and Vans have dabbled in the model in recent years, and we could see them lean into it even more. But one thing is for sure: Supreme isn't due for any major changes.