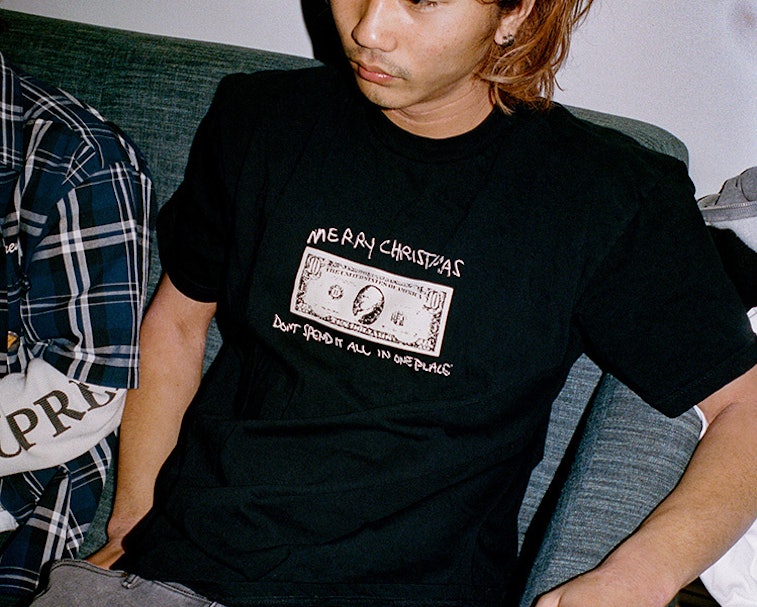 Supreme’s seasonal T-shirt drops are often where you find the hidden goods — no high-profile collaborations but solid in-house graphics and commissioned work from artists who may not have been on your radar. This winter’s collection is no different, with nine new tees that’ll easily slide into your wardrobe.

While most of Supreme’s new T-shirts are evergreen, the lineup includes a Christmas graphic with as much attitude as you’d expect from the New York City streetwear brand. A $10 bill appears on the tee along with the hand-written message, “Merry Christmas Don’t Spend It All In One Place” — and if the shipping gods are in your favor, you may just have it before New Years.

Weirdo Dave, an artist embedded in skate culture and whose worked with Supreme in the past, created the art for the “Spend It” T-shirt, with contributions also coming from photographer Martha Cooper, Christopher Wool, and another skateboarding mainstay in Sean Cliver.

No weak links — Cooper, a longtime documentarian of the graffiti scene, provided a portrait of Lady Pink, also known as the First Lady of Graffiti. Wool meanwhile, lent his work from the mid ‘90s and early ‘00s, the very pieces which appeared across denim and short-sleeve shirts earlier this season. Rounding out the artist contributions is a monster’s hand creeping out from under the bed in comic book style courtesy of Cliver.

Coming from in-house at Supreme is a “Spikes” tee featuring a well-armed and -armored character, and a spell-out for the brand in gold and diamonds. A cropped version of the 16th century painting Venus, Cupid, Folly, and Time appears on another tee, while the last of the lot sees a tasteful graphic in the style of a school’s crest along with “experientia docet,” Latin for “experience is the best teacher.”

As always, the collection of T-shirts will release as part of Supreme’s weekly drop at 10 a.m. ET Thursday, December 23, through both its website and physical stores. They should each fetch the $48 and come in a variety of colors, and you shouldn’t run into too much competition as long as you aren’t totally lackadaisical.