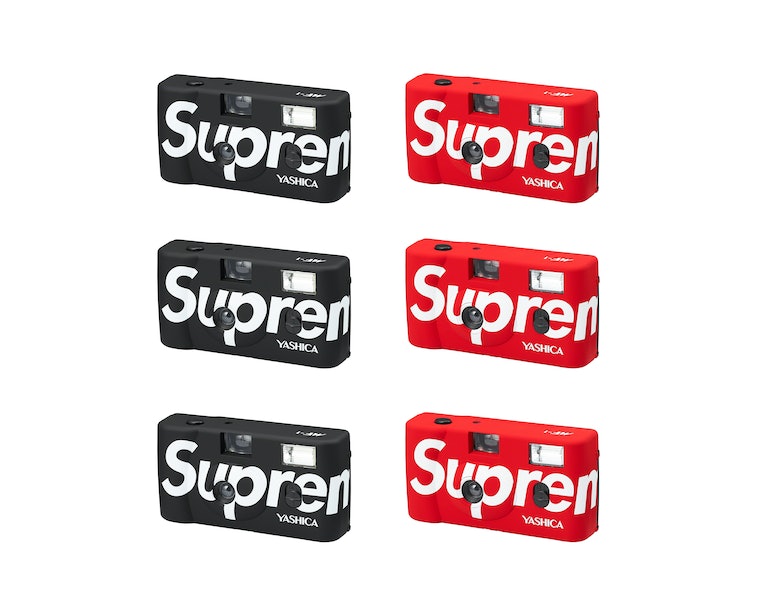 After getting into the instant film game last year, Supreme is slated to drop its very first camera this week. The New York streetwear brand will release a logo-adorned Yashica MF-1 35mm film camera. Available in either black or red, the reusable plastic camera comes with a fixed 31mm lens and built-in flash.

35mm point-and-shoots are a popular choice amongst amateur photographers because they’re cheap, easy to use, and produce photographs with an attractive grain. I know far too many people who have Instagram accounts dedicated to their 35mm shots, and we may now see a new crop of hypebeasts getting into the game.

Reviews on the camera aren’t great — Originally launched as a Kickstarter project in 2019, Yashica’s MF-1 camera is best viewed as a slight upgrade to disposables. The original brand actually ceased operations in 2005 and produced a poorly reviewed point-and-shoot with the same name in 1979. Yashica was then relaunched by new owners in 2008.

Photography bloggers haven’t been a fan of the new MF-1 and point to the winder and door as the weakest points because they’re so flimsy. The photographs aren’t super sharp either, and it's best used for distances up to 20 meters. If you’re planning on taking any landscape photos, the MF-1 is definitely not for you.

It shouldn’t be too expensive — While Supreme has yet to announce the price, the MF-1 typically sells for $60. Supreme’s should come in at the same price or only slightly above when it drops this Thursday. Come 11 a.m. ET, you’ll be able to get the camera through Supreme’s website and physical stores.

If you’re semi-serious about photography, you’re better off doing some research and picking up a vintage 35mm camera. And if you want something new, one blogger pointed to the Lomography Simple as a more robust option for a third of the price. You should really only buy Supreme’s MF-1 if you’re that obsessed with the logo and taking photos is secondary.