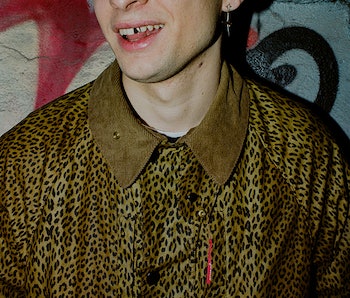 If you want a waxed cotton jacket, you go to Barbour. The British heritage brand has been waterproofing outerwear for five generations since it launched in 1984 to provide oilskins (oil-covered fabric) to a community of seaman and dockers. It then became well known for outfitting the British military in World War II, but Barbour's hallmark design would come in 1936, when it created the first waxed cotton jacket for motorcyclists.

Even today, "Barbour" is synonymous with waxed cotton — which is why there was no company better for Supreme to enlist for its latest collaboration.

Supreme's twist on the classic — Supreme's capsule with Barbour, dropping this week, is highlighted by a Lightweight Waxed Cotton Field Jacket. The contemporary silhouette is inspired by the Bedale, which was one of three key pieces to help garner Barbour worldwide popularity in the '80s. In Supreme's hand, it's done up in leopard print and an equally loud orange, giving the stately piece a more aggressive look.

The former version maintains the classic corduroy collar to keep a foot in both the worlds of the countryside and the city, while the latter could pass as a more technical garment with its high visibility. As the conversation around waterproof outerwear is dominated by 3M and other more modern innovations, these field jackets provide a more handsome alternative — especially the leopard print.

For those who want to remain more firmly in the past, an all-black version with more subtle zipper tags (i.e. not Supreme red) are the way to go.

But that's not all — The collaborative capsule also includes a waist bag, crusher hat, and box logo camp cap all done up in waxed cotton in the same three patterns. Of these three accessories, the camp cap is the most prototypically Supreme, rendering Tyler, the Creator's once signature hat in an wonderfully unexpected material.

Dropping this Thursday — As always, the latest Supreme drop will go down at 11 a.m. Thursday. For the time being, launches are still online only because of the COVID-19 epidemic. Considering that this Barbour collab will appeal even to the fashion crowd exhausted by the mania around Supreme, expect each of these pieces to fly.

With all the notes it hits, this is the best thing Supreme has done all season.