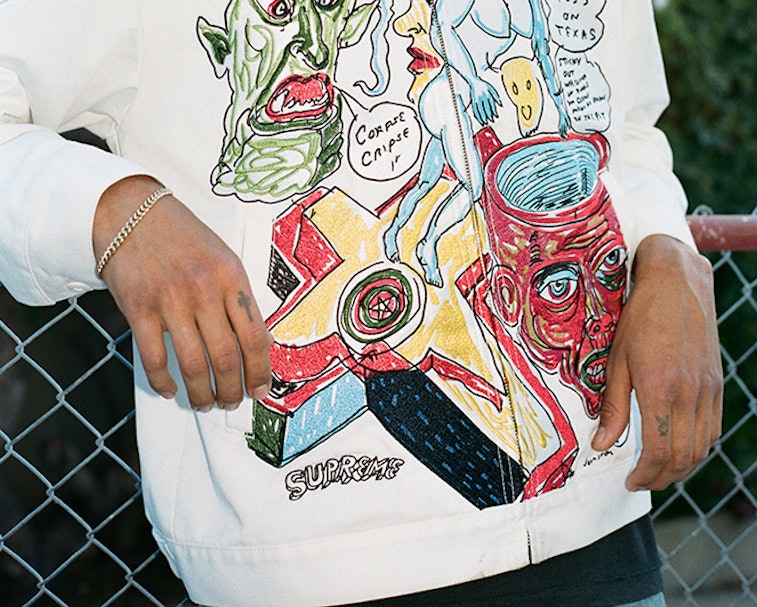 Supreme's affinity for the arts continues this week with a new capsule featuring original work from the late David Johnston. His hand-drawn cartoons are splashed almost chaotically onto a range of apparel for an effect that's playful and very much inline with the lo-fi aesthetics of skateboarding.

Among the work is Johnston's "Jeremiah the Innocent" frog, which appeared on his Hi, How Are You? album cover and was famously worn on a T-shirt by Kurt Cobain. Here, he's been given a speech bubble that reads, "I know Supreme." If anything's destined to sell out before you know it, it's the flannel, T-shirt, and pants featuring his signature alien-like creation.

David Johnston already knew Supreme — The posthumous work marks the second time Johnston's work has been used in a collaborated with Supreme. A 2012 capsule featured three of his drawings on T-shirts, but this collection is much more expansive with work jackets and pants, rayon and plaid shirts, hoodies, T-shirts, and beanies.

Many of the works are much more elaborate as well, particularly the work jacket that embroiders the full work of art. It's beautifully done and the piece for you if you're a person who appreciates the finer details of clothing. (It's also likely to be the most expensive piece because that level of embroidery ain't cheap.)

An acclaimed musician and visual artist — Johnston was a seminal underground figure in the alternative rock scene, with Cobain and Sonic Youth both citing him as a major influence and artists who have covered his work include Beck and Wilco. His struggles with mental health — which included a diagnosis of schizophrenia and several hospitalizations — helped shape both his music and visual art with major themes of heartbreak and existential dread.

Thirty of his pieces were featured in the 2006 Whitney Biennial, which marked a sort-of second coming out period after Cobain's support helped him find a wider audience. In a profile focusing on his inclusion at the museum, the New York Times said his art "reflects this kind of visceral connection to his desires and his fears, some real and many only in his mind."

You know the drill — As always, the latest Supreme drop will go down this Thursday at 11 a.m. EST. For the time being, releases remain online only.

Here's hoping this sparks another wave of interest in the late artist.