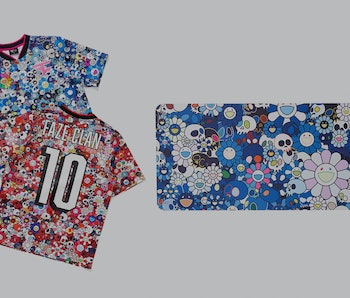 Takashi Murakami has enjoyed more support from the streetwear community than anywhere else, and the Japanese artist is now turning to a new field with his signature floral motifs.

FaZe Clan has tapped Murakami for a new eSports jersey that brings one of hypebeasts’ favorite artists to the world of gaming. The limited-edition shirts, available in either blue or red, will drop next week along with two sizes of mousepads available in the same colors.

With a career that’s seen him connect more with sneakerheads and streetwear enthusiasts more than the art crowd, the 59-year-old Murakami sees linking with a more youthful eSports team as similar to the pairing of Jean-Michel Basquiat and Andy Warhol.

“For Warhol, who was past 50, to collaborate with Basquiat, the young superstar, seemed to me as though the former was sucking up to the youth,” Murakami said in a release, “and I looked on feeling a bit sorry for him. Then, they both passed away. A little over a decade later, the once-incongruous collaborative paintings, which had seemed to feature the generational divide as a sales point, started to look very fresh, like an embodiment of the situation of their time.”

Gaming and streetwear are already growing close — While the luxury sector is simultaneously getting involved, streetwear too is becoming more closely linked with gaming. Travis Scott has partnered with Playstation and Fortnite for high-profile releases, while Nike, Puma, and Adidas have each embraced casual and professional gamers alike.

Streetwear makes for a more natural crossover with gaming than a Louis Vuitton or Ralph Lauren, as both cultures are naturally youth-oriented without such an overt reach for a new audience. And despite his age, Murakami has a lot more in common with hypebeasts than he does with the closer-in-age Lauren.

“Some people may think our pairing rather incongruous, but in 30 years’ time, the meaning of this collaboration within art historical context will perhaps be reviewed and reassessed,” Murakami added. “And so, while I felt a bit shy about doing a collaboration with such young people, I went along with their request, trusting in the freshness of the landscape the future audience will see in this project.”

A NTWRK exclusive — Murakami and FaZe Clan’s limited-edition capsule will release through NTWRK, the hybrid shopping and video platform that’s increasingly secured covetable and exclusive product drops. The jerseys and mousepads will go on sale on the app at 3 p.m. EST next Monday, July 28, with prices ranging from $50 to $100.