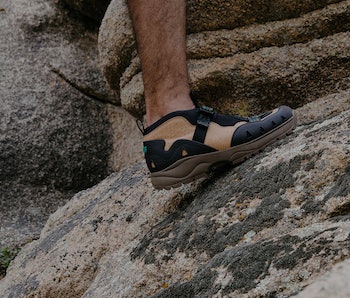 Teva, known best for its crunchy outdoor sandals, is bringing back a more hearty pair of shoes from the ’90s. The Revive ‘94 Mid is a sort of sandal-hiking sneaker hybrid, a mid-top shoe originally released in 1994. New technology should make the revived sneaker a solid, and unexpected, option for trail excursions — with Teva’s signature strap system bringing a sense of the familiar.

Adjustable straps in a native pattern envelop the Revive ‘94 Mid’s upper and replace the need for laces. This fastening system should make for a glove-like fit, and in place of a typical tongue is mesh paneling that won’t let water in. Textured and waterproof leather in sand also roots the shoe in nature and has the appearance of a rock face, helping make the Revive ‘94 Mid stand out from Teva’s lesser-known boot lineup.

It’s also nice to see a ‘90s-oriented revival that doesn’t lean on neon colors, as has become standard, and at this point overwrought, as brands try to cash in on the retro aesthetic.

Soles that’ll stand up — What’s down below is what’s most vital for hiking sneakers, and the Revive ‘94 Mid looks to have all the requisite requirements. The midsole uses memory foam-like MAX Comf cushioning alongside molded EVA foam for comfort, while a spider rubber outsole will stand up to jagged terrain and offer high traction.

Despite the waterproof leather used in the upper, the Revive ‘94 isn’t totally waterproof. Instead, it’s designed for traversing manageable bodies of water with a shape that dispels any water that may find itself inside. If you’re crossing rivers or streams, you don’t actually want a fully waterproof shoe because the materials that keep water out would also keep in any water that inevitably finds its way down the ankle.

Teva’s Revive ‘94 Mid is out now for $160 through the brand’s website. A predominantly black color scheme has been released alongside the more nature-oriented pair, and both provide great incentive to stray from the usual suspects of gorpy footwear.