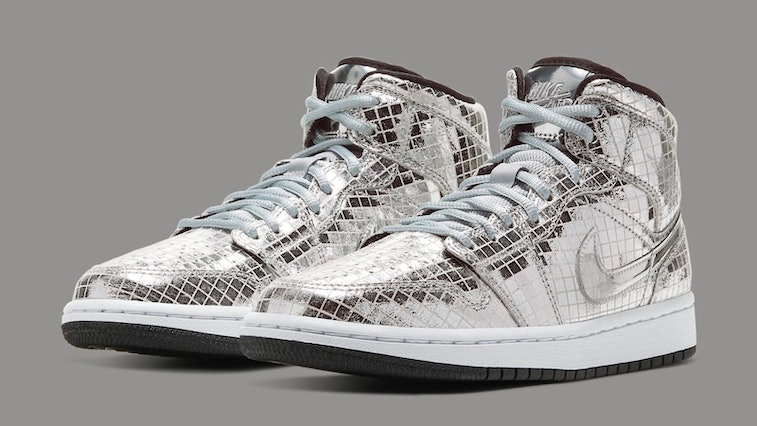 2020 is already proving to be the year of the Air Jordan 1 Mid, but it's not going to get any wilder than this. This week, Nike is releasing a "Disco Ball" variation of the shoe that's sure to be polarizing. The description is all in the name, but I'll say it anyway: the upper is made up of a series of silver, reflective tiles inspired by the center piece of countless parties. This glamorous theme continues to the insole, which is made of red velvet and features a Swoosh trophy graphic in gold.

Not for the faint of heart — I'm certain there are purists who hate the disco hit on an AJ1, but I love it. I'd never have the audacity to attempt them as part of my everyday attire, but I would absolutely bust them out for a night of distinguished hedonism. These AJ1s have a more niche association for me: the hallway outside the bathrooms in Bushwick's notoriously weird nightclub House of Yes. It's a spot tailor made for the 'Gram, and I'm not above taking the exceedingly obvious fit pic. Whether that's before or after I dance onstage and likely scuff the hell out of them cannot and should not be planned.

Bring disco back to your life — The "Disco Ball" Mids will hit the SNKRS app and select retailers on February 1. At $125, I'd call them a bargain for the amount of joy they'll spark.