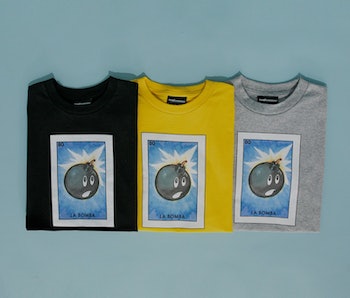 “Cinco de Mayo” is upon us, bringing out the worst of white people and brands who want to celebrate without doing their homework. The Hundreds, however, is no such brand and has come out with a deep cut of a capsule celebrating Mexican culture without falling into any tropes.

Bobby Hundreds and co. has collaborated with Lotería Don Clemente, the traditional Mexican card game similar to bingo. Don Clemente Jacques began publishing his version of the game in 1887, and the card images are now iconic within Mexico and for its people abroad. Spearheading the collab is a Don Clemente style graphic for The Hundreds’ Adam Bomb, who shall henceforth in this article be referred to as “La Bomba.”

Cinco de Mayo done right — It’s refreshing to see a brand avoid the obvious in celebrating Mexico’s victory in the Battle of Puebla, let alone not veering into the problematic. The Hundreds, despite being a crucial player in the earlier days of streetwear, doesn’t get enough credit — from myself included. Seeing the brand do Cinco de Mayo right should come as no surprise, as its collabs are always well-considered and show genuine appreciation for the subject at hand.

La Bomba’s Lotería card appears on a T-shirt, trucker hat, and a magnet — as well as in a game set created for the occasion that has, unfortunately, sold out. Rounding out the capsule is another T-shirt, as well as a hoodie, that marry the two parties’ logos along with graphics pulled directly from the Lotería cards.

The Hundreds collaboration is the first time Don Clemente has ever worked with another brand, and the capsule should teach many people about an element of Mexican culture they may not have been familiar with. And for those who’ve invested countless hours in the game, they can pick up an unexpected and sentimental commemoration of the most revered Lotería.

Scoop it up today, of course — The Hundreds and Don Clemente gear is now available through the former’s website, with prices starting at $38 for the magnet set and topping out at $89 for the hoodie. As we mentioned, the game itself is already sold out, but everything else is still up for grabs in the best Cinco de Mayo drop you’ll see today.