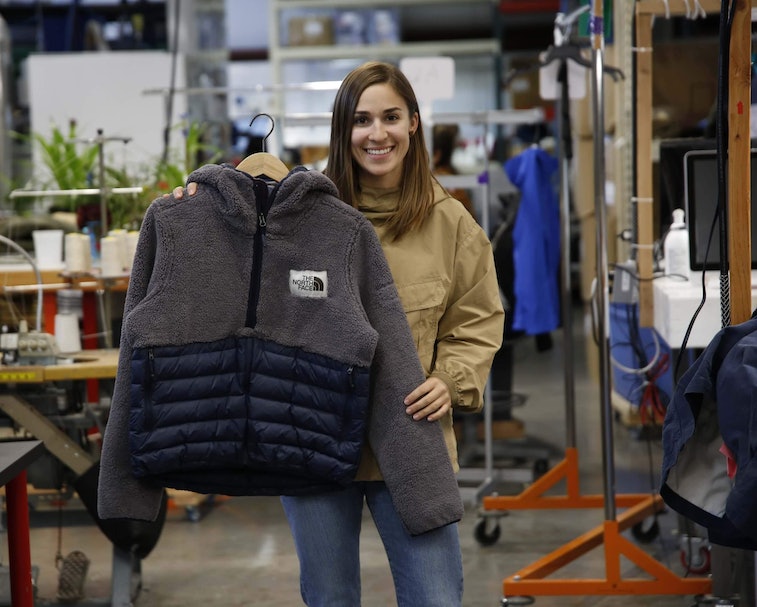 Both The North Face and Patagonia have taken the secondhand market into their own hands by repairing worn gear and selling it back to consumers at a discount. The sustainable programs ensure an increased lifespan for outdoor gear, as well as giving customers the chance to buy used clothing that's been guaranteed by its very producer.

The North Face has gone a step further with its Renewed Design residency, which invites the company's own designers to rework vintage apparel. Some of the more subtle twists are for sale straight up, but the more alluring designs are going up for auction, with proceeds going to non-profit environmental organizations.

The rare gear — A Thermoball belted jacket, patch Pocket Nuptse, Campshire down pullover fleece, and Down-Insulated crew hoodie will all go up for bidding. The four bespoke upcycled pieces were created by four senior designers in October at the inaugural residency workshop.

The belted jacket, which is my personal favorite, started as men's 2XL jacket that's been turned into a women's piece. Designer Kellen Hennessy explained the process behind her creation:

"I love military liner jackets, and the weight and scale of this garment reminded me of one of my favorite vintage liners," Hennessy said. "By replacing the broken zipper at the front and rounding out the neckline, it really began to take on that feeling. After trimming off the damaged cuff — when worn on a smaller frame — the scale of the sleeves had an interesting vibe, so I wanted to add a belt to help carry out that idea and to make it more wearable on different body types. The patch pockets help keep it utilitarian, and less formal, which I love."

Happy bidding — The auction is already underway for the fleece and crewneck, with the two jackets set to begin at 12:01 p.m. on February 12. I wouldn't be surprised if the prices spike for these unique pieces, which isn't too upsetting when charity is involved. Upcycling and DIY are both having major moments, so perhaps this can provide inspiration to start tinkering yourself if the price is a barrier.