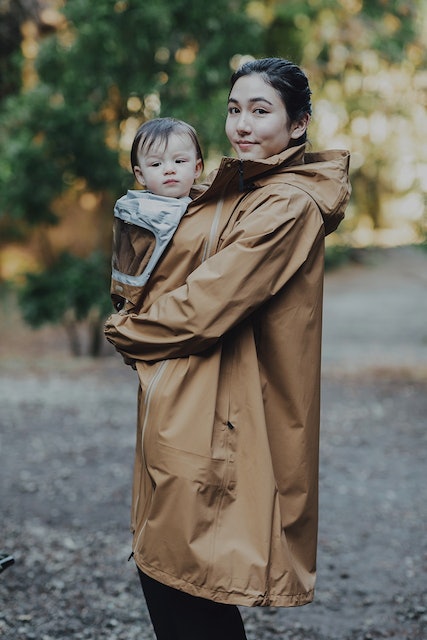 There are no shortage of killer raincoats out there to keep yourself dry, but apart from a stroller, what the hell are you supposed to do about your baby? The North Face Japan has come up with one piece to solve both problems, dubbed the MTY Pickapack Rain Coat.

Coming from TNF Japan’s year-old maternity line, the new rain coat is designed for mothers and fathers alike to keep their baby close while sheltered from moisture. The ingenious design includes a modular baby carrier that can be worn at the front or rear of the waterproof coat. Well-ventilated Hyvent fabric assures the baby can breathe regularly, while a transparent window prevents you from sticking your child into a dark void.

Given that Input is foremost a tech site, we can’t help but think of the baby carrier from Death Stranding. What The North Face Japan, otherwise known as “Purple Label,” has cooked up is essentially a much more practical version. You’re not going to be carrying your offspring through a nuclear wasteland, but you may very well have a baby onboard while walking through the rain or snow.

Good for pregnancy, too — Because of the Pickapack’s roomy, child-encompassing fit, it’s been designed with pregnancy in mind, too. Machiko Yano, designer for TNF Japan’s maternity division, spoke in an interview with PR Times about being hesitant to make significant investments in maternity wear because they’d become useless after giving birth. To cast an even wider net, she’s also had fathers in mind while creating child friendly outdoor gear.

Among the products TNF Japan has released are down coats, one-piece fleece dresses, and water-resistant pants that can expand during pregnancy. But no item yet has been as cool, and as versatile, as the MTY Pickapack.

The North Face Japan has already seen sales for its dedicated products rise by 300 percent in the year since introducing its maternity line. Translated to English, Yano said, “We will continue to develop products that can support the outdoors that families can enjoy through maternity wear, regardless of the framework of men and women.”

Japan’s taken the lead — Aesthetics are often the primary reason why pieces from The North Face Japan, which is licensed to Goldwin and operates independently, are more covetable than the gear we get stateside. With the maternity line, we’re seeing a whole new level of technical application that’s lightyears ahead of us.

The MTY Pickapack will release sometime this month exclusively in Japan, but the workaround of proxy services will allow you to get your hands on some of the coolest outdoor gear period we’ve ever seen.