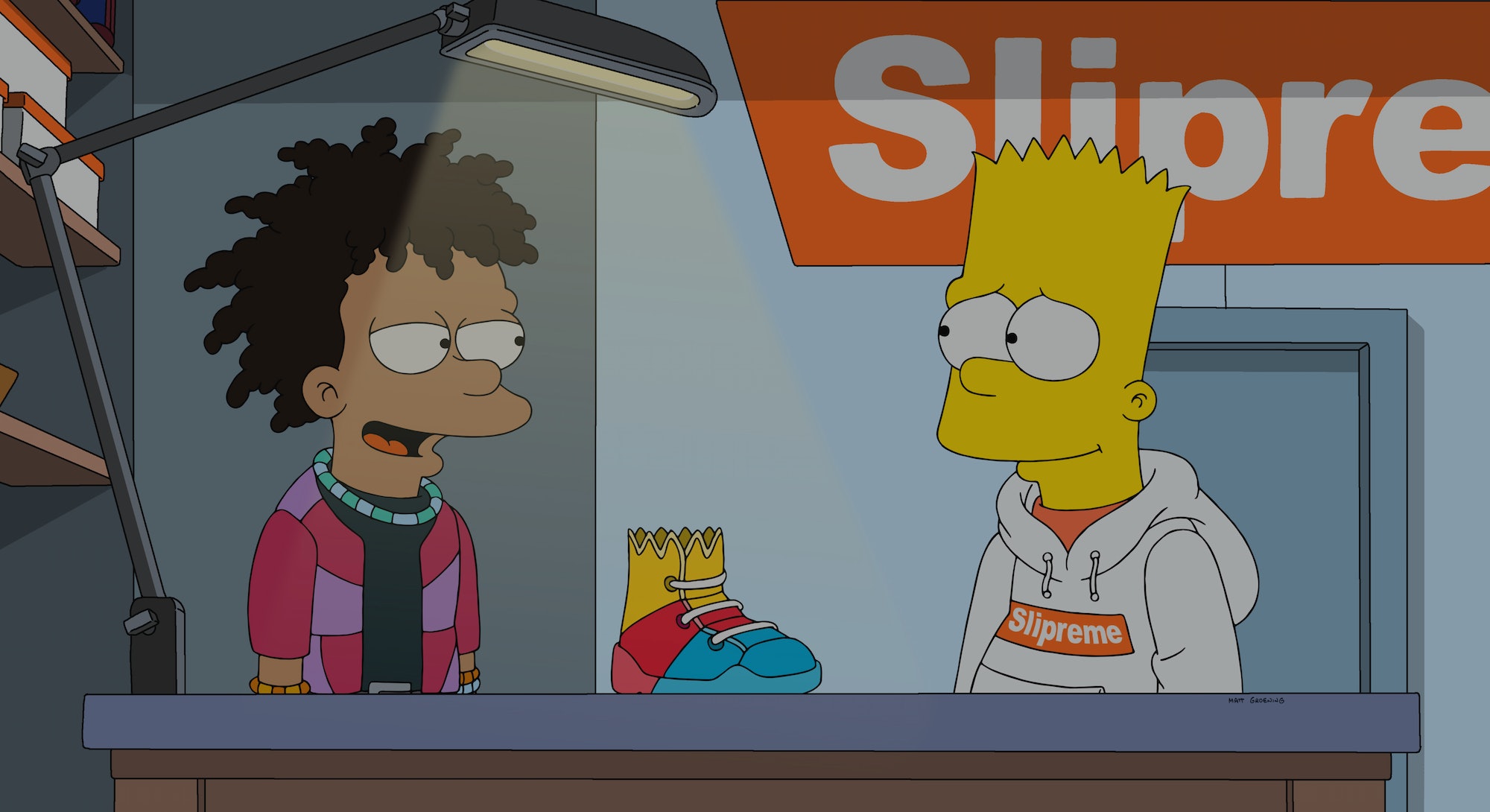 Hyped sneakers are just as hard to come by in the animated universe as in the real world.

The Simpsons parodied streetwear and sneakers in its latest episode, placing Supreme in the crosshairs as the embodiment of all the struggles that come from trying to acquire highly sought-after products. Assisting with the plot was guest star The Weeknd, whose character led Bart and Homer down into the whirlpool of hype.

The Simpsons isn’t the first TV show to focus its lens on the antics of streetwear and sneakers. Last year, Amazon premiered the original animated series Fairfax, which follows a group of middle schoolers in Los Angeles’ streetwear mecca as they chase clout at all costs. HBO also debuted The Hype, a competitive reality show that pits designers against each other. Both shows have been renewed for second seasons, although Netflix has yet to renew its kicks-centric series Sneakerheads that originally aired in 2020.

In “Bart the Cool Kid,” which aired Sunday, The Simpsons’ effectively captured the highs and lows that come from pursuing limited-edition releases with outsized demand. Bart and Homer go through the full lifecycle of hype, from the often short-lived buzz around a specific release to the annoyance of a brand eventually going mainstream.

Bart is lured into the chaos by The Weeknd’s Orion Hughes, whose Slipreme Caliphate 2 sneakers become lusted-over by all the kids at Springfield Elementary School. Bart tells his parents he’s “never wanted a piece of clothing so much before in [his] entire life” and without them, he’s nobody.

The fictional “Slipreme” label is a parody of skate brand Supreme, made clear through the name and mimicking red box logo. Over the past decade, Supreme has risen from a cult skateboarding label into the defining brand of a generation. Its products — including streetwear staples such as graphic T-shirts and hoodies; well-publicized collaborations with the likes of Nike, Louis Vuitton, and The North Face; and an array of increasingly absurd accessories — set the apex of devotion and resale prices for the field. But more recently, enthusiasm for Supreme has begun to wane.

Appropriately viewed as one of the founding fathers of streetwear, Supreme has begun to push the limits of hype as its products have become more widely available and adopted by an increasing number of streetwear outsiders. The Simpsons isn’t overly critical of the New York City brand, but it does use Supreme as an effective stand-in for the many jokes the industry inspires.

Today’s sneakerheads place all their faith — or lack thereof — in the SNKRS app or resellers, and the show calls back to the earlier days of the culture when you’d have to physically camp outside a store to secure the shoe you were after. Instead of waiting in line, however, Homer is convinced by a bootlegger that nobody will know the difference between a genuine and fake Caliphate 2. Homer purchases the duplicate and is happy to engage in subterfuge to make his son happy — a trick counterfeiters know all too well.

Overall, the athletic footwear industry is expected to be worth $95.14 billion by 2025, and sneakers have become the second-most counterfeited product on the market. The rise in counterfeiting can be partially attributed to sellers trying to get one over on unwitting customers, but some buyers are also willing to settle for a bootleg version of the sneaker they really want but can’t secure or afford.

Just as Bart garners his classmates’ approval for his kicks, the “Slipreme” label peels off and the sneakers completely fall apart because they’re fakes made from Band-Aids and newspaper. The real Caliphate 2s are made from upcycled vegan leather, a subtle nod to the rise of more sustainable footwear and alternative forms of leather. Orion seeks to soften Bart’s “global humiliation” by presenting him with trunks of clothing made by Slipreme. Later on, though, Hughes’ becomes subject to embarrassment himself when he’s exposed as a poser for owning a skate brand despite not knowing how to skateboard.

“When you wear clothes you don’t understand, you’re not you anymore,” Homer says. “You’re someone better.”

Homer later goes on to wear one of the Slipreme hoodies, putting him in the spotlight as a sudden influencer. He claims he finally knows what it feels like to be stylish, the same way some folks in real life like to imagine themselves after being devoted to one lone brand. Homer’s friends don’t understand his new style at first, as most middle-aged adults wouldn’t, but it eventually and surprisingly spreads amongst his peers. “When you wear clothes you don’t understand, you’re not you anymore,” Homer says. “You’re someone better.”

Bought love is the best love

Orion and Bart are horrified when they see middle-aged men in Slipreme, comparing the phenomenon to the one leading to Ed Hardy’s demise. Hughes tells the story of how Ed Hardy, an edgy brand in the 2000s, eventually seemed to become a staple among divorced dads who wanted to look cooler on their dating profiles (such real-life reality star Jon Gosselin). With the floodgates opened, the “$700 million empire [was] sold for scraps.” Hughes tearfully points out that middle-aged men aren’t the target for Slipreme and he doesn’t want his brand to end up like Ed Hardy.

By the end of the tidy 22-minute episode, Homer realizes he has no business wearing Slipreme, thanks to a grounding pep talk from Marge. Bart, too, praises his dad for doing something few older people are willing to: changing his mind. Throughout the episode, The Simpsons also manages to tap into another troubling trend besides the cheap thrill of owning a popular sneaker.

The Simpsons’ did well in capturing the triumphs and woes of streetwear and sneakers in a clean, funny, and relatable package that even outsiders can understand.

The Caliphate 2 is only sold at a newly opened store in Springfield’s former packing peanuts district, and the episode alludes to the gentrification of working-class neighborhoods across the globe. Strange art galleries and beard-only barber shops that pop up around the store mirror the progression of hipster enclaves we’re all familiar with.

Even though others have beat it to the punch, The Simpsons’ did well in capturing the triumphs and woes of streetwear and sneakers in a clean, funny, and relatable package that even outsiders can understand. It pinpoints the industry’s weak spots, including resellers and counterfeiters, and makes light of other topics like the inevitable transition of something cool and fresh that makes its way into the hands of clueless consumers who don’t know or appreciate its background. Homer captures the inherent hollowness of such a purchase-obsessed culture best with one of his classic one-liners: “bought love is the best kind of love.”