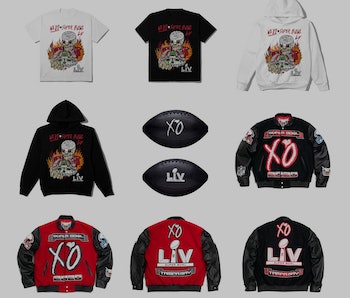 This year’s Super Bowl was pretty underwhelming — the Chiefs lost, The Weeknd delivered a mediocre solo halftime performance, and even the ads were meh. Truly, the only thing keeping me watching was an endless supply of wings and Twitter memes. But in celebration (or consolation) of The Weeknd’s performance, the artist is dropping SuperBowl merch, in collaboration with designers Warren Lotas and Jeff Hamilton along with Wilson Sporting Goods.

With assistance from the seasoned designers, The Weeknd has pulled off merch arguably more exciting than his performance. Jeff Hamilton is best known for creating loud leather jackets loved by the likes of Michael Jordan, George Michael, Drake, and soon, The Weeknd fans. Warren Lotas, on the other hand, received the short end of the stick with Nike, which filed multiple lawsuits against the designer for his Dunk lookalike sneakers. The Swoosh has inexhaustibly beaten Lotas, and his manufacturer, despite his attempt to offer a replacement shoe with further alterations. Let’s hope The Weeknd’s merch doesn’t welcome the same ramifications.

From jerseys to jackets — Set up as three capsules, The Weeknd’s apparel release is the NFL’s most extensive product launch with a Super Bowl Halftime Show performer ever. The collection includes T-shirts, hoodies, and varsity jackets in white, black, and red colorways, and a black football.

Out of all the offerings, two handcrafted Jeff Hamilton leather jackets stand above the rest. Coming in black or red, each piece features a massive XO logo in front, embroidered NFL and Jeff Hamilton branding on the leather sleeves, and a Super Bowl insignia on the back.

Warren Lotas designed accompanying tees and hoodies, boasting a screen printed graphic of a skeleton with bandages on its face overlooking a stadium — a nod to The Weeknd’s After Hours character and performance. Lotas’ designs come in black and white, and also feature SuperBowl branding on the apparel’s lower right corner.

Of course, no Super Bowl collection would be complete without a football. Thanks to Wilson Football — the official ball of the NFL — The Weeknd will release a limited edition Horween Essex leather football in matte black, with silver foil XO artwork and an embossed NFL logo. As part of the collaboration, Wilson will also auction off one signed XO football, with the NFL Foundation sending all proceeds to support Feeding America and their mission to end child hunger.

A costly collaboration — To cover all bases, The Weeknd’s merch is available online at the official NFL Shop, Wilson’s webstore, and The Weeknd’s own site. But move quickly — the pieces are just as covetable as they are limited, and the collection won’t be around for long. Prices start at $95 and only increase from there, so know if you’re after a Weeknd x Jeff Hamilton leather jacket, you’re going to have to cough up a stimulus check.