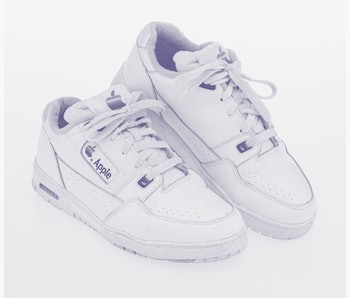 Every so often an auction house gets to capitalize on an unlikely overlap between distinct categories of obsessives. For Heritage Auctions in Texas, a pair of original Apple Sneakers brings together the otherwise disparate worlds of ’90s fashion and high geekery. Bidding for the somewhat worn — but thankfully not trashed — kicks opens on March 3, and precedent suggests they could wind up making most contemporary, limited-edition Nikes look like a bargain.

Fin de siècle chic — The “Apple Computer Sneakers, late 20th century” come in size 9.5 and, per Heritage Auction’s description, “were produced by Apple exclusively for their employees in the early 1990s.” According to the accompanying condition report, the buyer can expect “discoloration to the edges” and “mild surface soiling.”

Expect to pay top dollar — As SlashGear points out, the last time the same model of Apple’s certified footwear went under the gavel it had a reserve price of $15,000. Granted, this pair is in worse condition, but there’s no telling whether or not that’ll put a buyer off. With every passing year, this sort of memorabilia gets rarer after all, while Apple’s share price continues to climb.

Furthermore, as Nintendo and Sony have demonstrated this week with their auctioned Play Station prototype, when your target market is deep-pocketed founders and other members of the well-heeled technorati, money really is no object.