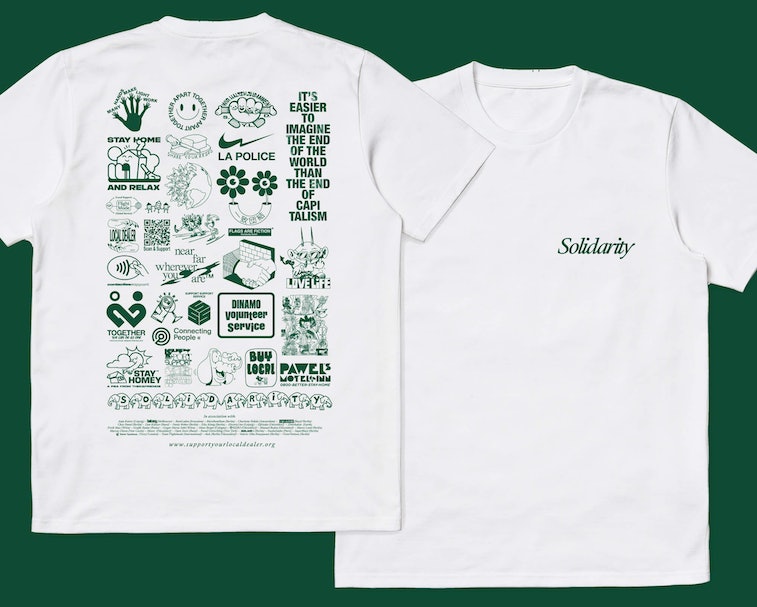 As much as the coronavirus has stunted the fashion industry at large, some good has come out of it in the form of well-designed T-shirts raising money for charity. Streetwear stalwarts including Supreme, Palace, and Noah have joined the cause — but it isn't just the major players stepping up to do what they can during this crisis.

Deniz Weber, a German designer who's worked with Carhartt WIP, has started a tee-based initiative called Support Your Local Dealer via a non-profit he set up called Solidarithek. With a focus on solidarity, Weber has launched two T-shirts to raise proceeds for creatives and local businesses impacted by the pandemic. So far, he's given the money raised to 12 organizations in Europe and Africa, with a promise of more to come. Those in need can also apply through his site to receive aid.

The tees — Weber's first release, which launched in March and is still available to purchase, went with a world tour theme and translates the word "solidarity" in 78 languages for the rear graphic. Up front is smaller "Support Your Local Dealer" text hit with a cyclical motif emphasizing the importance of community.

The second T-shirt tackles the idea more ambitiously, as it features 31 logos meant to reflect the current state of the world created by 31 different designers. Weber told It's Nice That he reached out to his "kings and queens" of the creative world, including Eike König, Dinamo, and Anja Kaiser. Their creations are all splashed into the back of the shirt for a logomania effect reminiscent of the racing world.

Full transparency — If you want to know where your money is going, Weber has fully spelled it out. Both T-shirts sell for €30, half of which goes to production costs and shipping. The remaining €15 is then donated to the organizations listed on his site.

Weber didn't just ask the designers to work for free, an occurrence all too common in the field. "If they asked for money I paid them a small amount out of my pocket, since I’m still in the privileged position to have a job," he told It’s Nice That. "With others I made exchange deals… an illustration in return for a tattoo appointment, or an icon in return for some fashion from my personal Carhartt WIP archive."

You can buy the T-shirts or become a sponsor — Both tees are available to purchase right here. You can also make donations straight up through Weber's site, or if you want to take things further he's accepting sponsors for the initiative. Anyone can apply to have their own logo on the tour tee in exchange for their support, and they'll be accepted if they share Weber's same values. Among them are: "No Sexism. No Racism. No Hate."