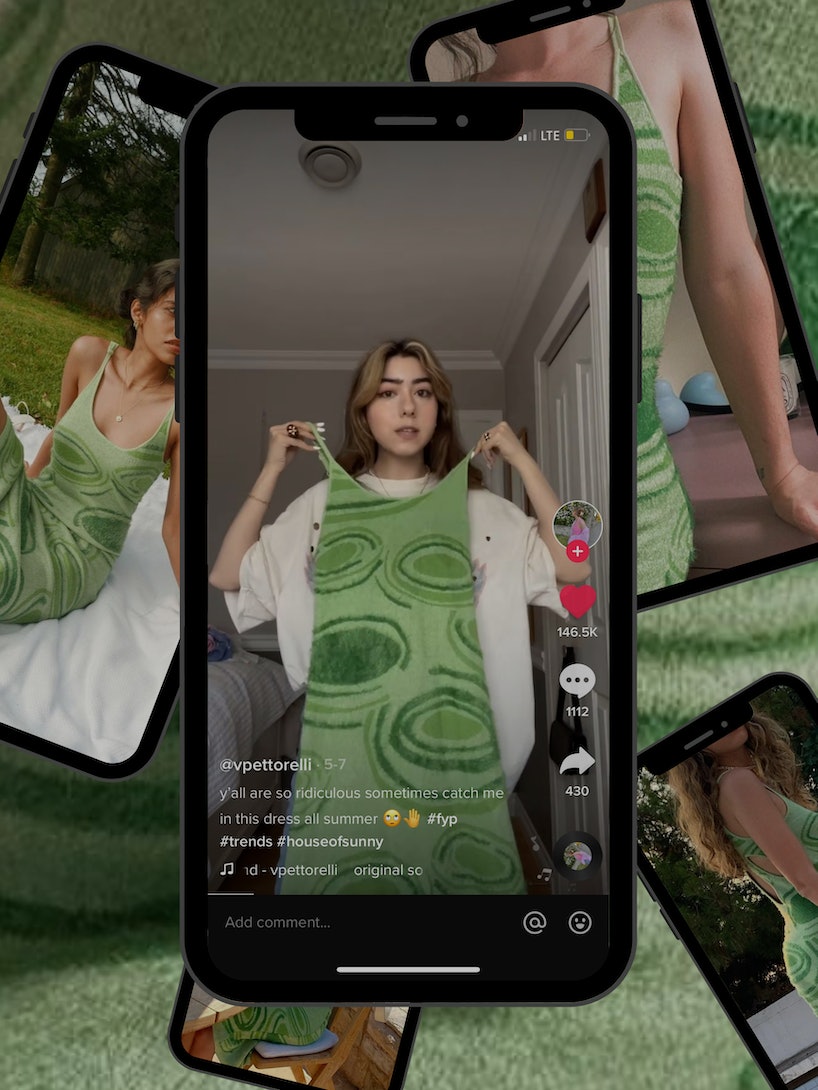 “Cottagecore,” “avant basic,” and “regencycore.” These are all fashion trends you’re probably familiar with if you’re on TikTok, not a Vogue subscriber.

Thanks to the app’s accessibility and insanely niche algorithm, the fashion industry is no longer the only voice directing new styles and trends. Now, millions of people are watching and making one-minute TikTok videos at a faster pace than those reading fashion magazines — allowing anyone, not just Anna Wintour, to be someone.

But when so many people have an opinion, it’s hard to figure out what your own is: Do you really like that viral top or do you like it just because everyone else does? Do you hate it because everyone else does? With aesthetics revolving around distinct statement pieces — each of which is labeled a must-have — few can afford to buy into the ever-changing look, either. And on TikTok, you’re just as likely to come across a video praising a specific piece as another explaining why it’s out of style.

Not only does this attitude encourage overconsumption — buying the latest pieces to fit in — it’s being criticized by a growing number of people online. Some acknowledge that centering one’s style around specific pieces or trends doesn’t allow for individuality — while others are full-on bashing the popular items, with little regard for those who have actually bought them. Much like high school, TikTok fashion trends are dependent on having the hottest items of the moment, at that moment.

One specific piece has caused controversy on TikTok: indie brand House of Sunny’s Hockney dress. Promoted as ethically made, the $128 item boasts a flattering fit, alluring green color, swirl graphics, and cozy knit material. All of the above are what attracted Vanessa Pettorelli, 21, to buy the dress — only to be met with videos on TikTok saying the piece was “over.”

“Cancel culture has now moved onto fashion trends,” Pettorelli told Input. “And TikTok has turned into a popularity contest.” Too many people are following a bandwagon instead of deciding whether they like a certain piece of clothing or not,” she said. “It really is like high school — are you a cool kid who fits in with the ‘now,’ or not?”

“TikTok has turned into a popularity contest.”

Popular girl Kendall Jenner was first seen wearing the green Hockney dress in July of 2020, when the dress had already sold out twice and was accepting pre-orders for its third drop. Like most coveted items nowadays, the Hockney dress was wanted by many, but ultra-exclusive. Resellers even bought up the limited drops of the dress only to mark it up online for up to $1,500. Owning the piece was like being part of a “cult,” Vogue wrote last year.

Pettorelli recognized she wanted the dress right away — but to ensure she wasn’t part of said cult, and actually wanted the piece for what it was, she didn’t purchase the silhouette until February, months after it had debuted. “It’s such an expensive piece,” Pettorelli said. “I wanted to make sure I would cherish it and wear it for years, not just in the moment.”

Buy in, or be left out

Few shared the same mindset as Pettorelli, though: The elusiveness of the Hockney dress, paired with its high price tag, led consumers to seek alternatives if they wanted to fit into the trend.

Just weeks after Jenner was seen donning the $128 dress, similar styles began popping up on fast fashion sites like Shein for one-tenth of that price. But the lack of saving, or waiting for a drop, led people to put less value on the ripoff designs than the original, said Pettorelli. And by authorizing consumers to buy into a style, rather than develop their own, the fast-fashion versions of the dress “allowed and encouraged people to overconsume,” she added.

Pettorelli doesn’t blame those buying the dupe. People are just looking to fit into the hottest trends — and because they change so quickly, consumers need an affordable price tag to go along with the aesthetic. “I was never much of a dupe girl until I started watching fashion hauls on TikTok,” reads one review of an Amazon dress copy.

“We need to consume less overall,” said Pettorelli, noting that part of that attitude comes with developing a sense of personal style. “I’m not going to stop wearing something because it’s not trendy anymore,” she said. “I think my dress is cute, so I’m going to wear it. Who cares?”

But with the fall of one trend rises another that will surely be hated in just a matter of months, once its popular pieces are reproduced and oversaturating the market.

“TikTok has made trends so visible,” Mandy Lee, 30, told Input. “About 20 years ago, we had print publications, models, and celebrities — now, when you open an app, you have millions of influencers and people who are visible to you.” A video on TikTok can receive millions of views in mere minutes, distributing its content more rapidly than most sources out there. Not only are trends moving more quickly because of it, but we’re experiencing “micro-trends” that last a matter of weeks, if not days.

According to Lee, who works as a trend forecaster, a typical trend-cycle can be broken down into five parts: introduction, rise, acceptance, decline, and obsolescence. Said cycle used to last 20 to 30 years, she said. Now, the same five-step process is spinning faster than ever, nearing a speed that’s out of control.

No trend is the new trend

“We’ve lost a sense of individuality,” Lee said. “People are shopping backwards, where they see an item they love and buy it without thinking of how to wear it.” Focusing on specific pieces or trends causes imitation, and thus oversaturation, said Lee.

Buying into a trend isn’t necessarily bad, she said — really, it’s about placing value on your items, and making sure you love them for what they are rather than because they’re hot at the moment. “If you’re trying to fit into a certain aesthetic, it can be hard to look inwards,” she said. But with her TikTok account, Lee wants to “encourage people to have conviction in what they’re buying, while retaining their individuality.”

“We’re consuming so much media now that it’s causing a lot of confusion in what we like.”

“It’s important to talk about trends in a positive way,” she said of her TikTok videos. Speaking negatively about aesthetics — which has become a popular discussion topic on the app, thanks to the algorithm rewarding controversy, said Lee — only hastens the trend cycle as people seek to fit in. “Not everyone is going to like something,” she noted, “but if you’re critiquing something on your platform, you have a responsibility to offer alternatives,” Lee said. Doing so allows people to form their own take on the trend, instead of hating on one specific aspect of it.

TikTok hasn’t just turned into high school — it’s transformed into the “‘hot or not’ sections of magazines,” said Lee. Not only are people hating on certain items, but impressionable viewers are watching their videos to see if any of the pieces mentioned are ones they own. “We’re consuming so much media now that it’s causing a lot of confusion in what we like,” Lee added.

TikTok’s algorithm can segment people into extremely niche aesthetics, Lee said, allowing trends to seem oversaturated when really, viewers are holed up in a specific corner of the internet. She even called the House of Sunny Hockney dress “the symbol of TikTok,” describing it as a piece that “took over” the app.

Still, owners of the dress — or any other piece that’s fallen victim to the ever-changing trend cycle — shouldn’t feel like they’re out of the crowd. “I’m not immune to the trend cycle,” Lee admitted, “but I’ve figured out how to make it work for me, instead of the other way around.”

Knowing that even current styles will soon be replaced by another niche aesthetic — what that is has yet to be announced by the teens of TikTok — makes investing in them much less worthwhile. So maybe, instead of buying into aesthetics, it’s time to start existing outside of trends altogether.