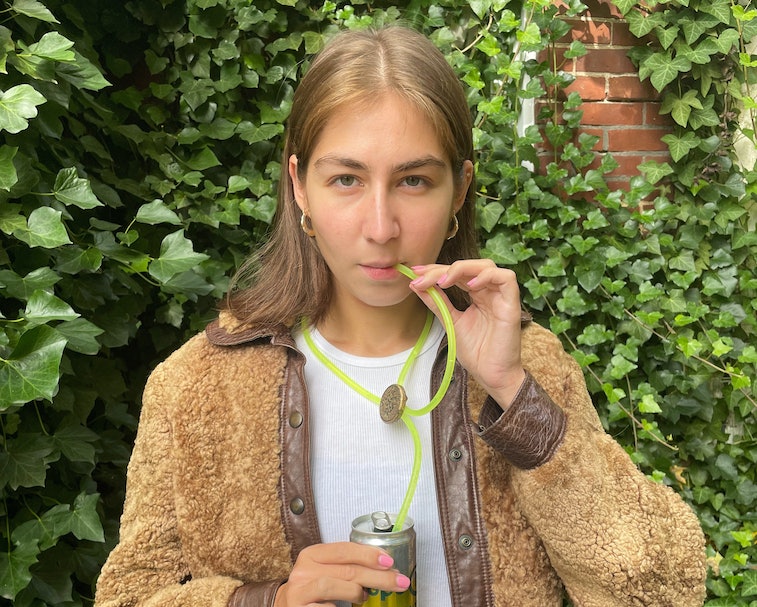 Utilitarian styles are hot right now. From practical yet posh outdoor gear to elevated workwear pieces, people are looking for functional fashion they can wear (and use) in daily life.

Mineral water brand Topo Chico is giving people its own taste of sensible style with Bolo Chico: A bolo tie that doubles as a reusable straw. Per a press release, the invention is the world’s first-ever bolo tie drinking straw and is ideal for sipping on Topo Chico Hard Seltzer, an alcoholic twist on the brand’s initial carbonated drinks.

Over the past few months, the hard seltzer market has excessively expanded, following the success of White Claw and Truly. Even Travis Scott has built his own hard seltzer brand, although his sales are most likely fueled by hype, not quality. I was curious to try Topo Chico’s own bubbly alcoholic offering — newly launched in spring 2021 — especially considering the hard seltzer entered the competitive market with an accessory no one else could flaunt: The Bolo Chico.

Designed in collaboration with Neon Cowboys, a female-owned inclusive fashion and tech company that creates light-up Americana apparel, the bolo tie features a fluorescent yellow straw cinched together by a metallic clasp bearing the brand’s lion motif. Two metal accents cap off the ends of the straw to keep them from getting dirty, while adding a western look to the accessory.

I was eager to test out the Bolo Chico, which was seeded to me alongside Topo Chico’s classic Hard Seltzer flavors: Strawberry Guava, Tangy Lemon Lime, Exotic Pineapple, and Tropical Mango. In the least holier-than-thou way, I try to avoid single-use plastic as much as possible, including when sipping on beverages. Carrying around a reusable straw, however, is easier said than done — you have to remember to pack it, clean it, and re-pack it for every occasion. As part of your outfit, the Bolo Chico is hard-to-miss, making its reusable straw accessible and fashionable.

After cleaning the accessory and wrapping it around my neck, I began my taste (and straw) test. Topo Chico’s hard seltzers surprised me; instead of artificial flavoring, each seltzer tasted like the fruit listed on the label, making for a refreshing drink. Even the pineapple flavor, which I expected to be my least favorite of the four, tasted crisp and light.

Lemon lime, the hardest flavor to mess up, was the flavor I most preferred to suck down in my neon straw. But sipping it through the Bolo Chico was much less satisfactory than the flavor — I had to provide a lot more suction than I thought I would, waiting until the liquid made its way around my entire neck.

Holding the cold seltzer by my chest the entire time I was drinking it was also a bit inconvenient, although I didn’t want to risk leftover seltzer dripping down my outfit. This concern was only made worse once I realized I couldn’t fit the metal caps back onto the ends of the straw, despite my numerous attempts. Especially after a few seltzers, the task seemed impossible; I even had a (sober) friend try her best to cap the straw off.

While not entirely useful, the Bolo Chico makes a great conversational piece. Its bright color instantly turns heads, while its straw capabilities are functional enough for a party or festival. So long as you enjoy Western style — and don’t mind using the accessory sans its metal caps — the Bolo Chico is worth trying. You’ve got nothing to lose except $20, which is what the straw retails for.

As of now, Topo Chico is sold out of the Bolo Chico, but you can look out for restocks on the brand’s website. You’re better off trying Topo Chico’s hard seltzers anway, especially considering they cost the same amount as the Bolo Chico. I can’t say they’ll compliment your outfit as much.