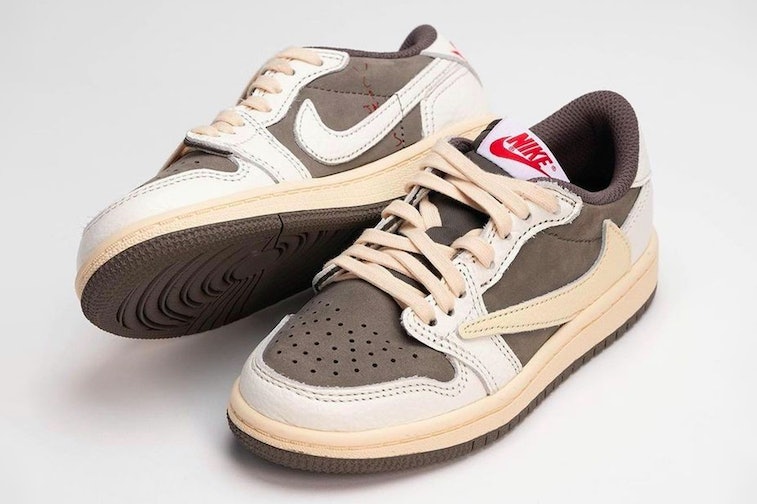 Travis Scott and Nike are back to working on sneakers, despite the tragedy and controversy surrounding the rapper’s Astroworld music festival. After releasing a “Cactus Jack” Air Trainer 1 — drawing in overwhelming demand during a raffle for the shoe — the collaborators are moving forward with their next drop, an Air Jordan 1 Low. Marked with Scott’s signature reverse Swoosh motif, the “Reverse Mocha” sneakers are expected to drop in the coming weeks.

The kicks arrive less than a year after a fatal crowd surge left Scott (and his partnerships) eclipsed by real lives lost, hundreds injured, and subsequent lawsuits. At the time, it seemed the rapper would never recover the value of his personal brand, but recent performances and packed releases have proved he’s bouncing back relatively unscathed.

Flip it and reverse it — Scott’s upcoming Air Jordan 1 Low nods to his first Air Jordan 1 High OG collab, dubbed “Mocha,” by flipping its color scheme. White leather overlays now sit atop a faded brown suede base, while the artist’s reverse Swoosh contrasts the upper in a cream shade. Unlike the shoe’s high-top counterpart, there are no black accents; instead, dark brown covers the nylon tongue and outsole.

At the heel, embroidered Cactus Jack branding offers a pop of red to the left sneaker as the right sneaker sees Jordan Brand’s Wings motif done up in an identical scarlet. Cream laces add to the retro look of the Air Jordan 1 Low, while a matching cream midsole meets a brown rubber outsole underfoot.

Charitable kicks — The “Reverse Mocha” sneaker isn’t capable of reversing the damage done to Scott’s reputation, but it’ll certainly revive the value of his name. As the rapper’s fans proved during his last sneaker release — which reportedly attracted over one million raffle entries — there’s lingering hype (and subsequent demand) for Scott’s sneakers.

His Air Jordan 1 Low is set to release on July 21 through the SNKRS app and select stockists. A full-family size run will be available, with adult pairs priced at $150. As Travis announced in May, proceeds from the drop will benefit his philanthropic effort Project Heal, which focuses on four pillars related to education, mental health, and addressing “safety challenges for large-scale live events.”